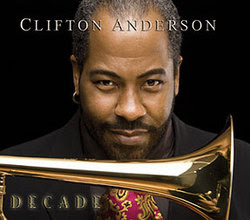 For the past 25 years Clifton Anderson has traveled the world as Sonny Rollins's front-line partner, and over a long career he's racked up sideman credits with artists such as Slide Hampton, McCoy Tyner, Muhal Richard Abrams, and the Mighty Sparrow. Now, with his new CD "Decade," Anderson has created an outstanding showcase for his skills as a player, composer, bandleader, and record producer. Anderson's previous record as a leader was 1996's "Landmarks," so "Decade" is his attempt at "encapsulating ten years of development, my perceptions and insights as a trombonist, producer, and writer."

Anderson believes that musicians who play together frequently and have known each other for a long time make the best music, and on the new CD he surrounded himself with close associates who happen to be among jazz's leading lights. From Rollins bands past and present come Bob Cranshaw, Stephen Scott, Steve Jordan, Al Foster, and Kimati Dinizulu. Jordan, Anderson, and pianist Larry Willis are alumni of New York's High School of Music and Art. Tenor saxophonist Eric Wyatt is Rollins's godson (Anderson is Sonny's nephew). Christian McBride and Kenny Garrett are friends of many years' standing; Garrett was a guest on Landmarks, and McBride was featured at Rollins's 50th anniversary Carnegie Hall concert in 2007.

"Everything I do musically is a representation of my life, and my life is really closely associated with my family," says Anderson. "I have very strong relationships obviously with my uncle, and with my mother; they've been the two essential relationships. In every note I play, there's something of my mother in there and something of Sonny."

"Decade" is dedicated to his mother, Gloria Rollins Anderson, who passed away in the spring of 2008. The standards "I'm Glad There Is You" and "We'll Be Together Again" were recorded with her in mind.

The CD also contains Clifton's arrangements of "I'm Old Fashioned" and the 1971 Bread hit "If" ("I always loved the melody to that song; I thought it would lend itself to the trombone and my sound in particular"), as well as six strong originals, including the calypso "Ah Soon Come," "Deja Blu" ("written to hark back to the classic 12-bar blues--I think we really captured that"), and the closer "Stubbs," a tribute to the late saxophonist John Stubblefield.

Clifton Anderson was born in Harlem in 1957 and raised in the Bronx. Although he received his first trombone (from his uncle Sonny) when he was 7, he didn't get serious about the instrument until his teens, after hearing the sound of J.J. Johnson's trombone on the album J.J.'s Broadway. "One of the things Sonny told me when I started playing is that your own personal sound is the most important thing," says Clifton. "What separates you from the next person is your sound, which makes you unique. Technique and all the rest comes later."

A graduate of the Manhattan School of Music, Anderson is an original member of Slide Hampton's The World of Trombones. He spent three years with the group in the late 1970s, and has also contributed to albums by jazz artists such as Muhal Richard Abrams, Geri Allen, Lester Bowie, McCoy Tyner, and Wallace Roney as well as to sessions by Paul Simon, Stevie Wonder, and calypsonians Lord Nelson and the Mighty Sparrow. Clifton began his long professional association with Sonny Rollins in 1983, performing on the saxophonist's "Sunny Days, Starry Nights" album. Recently, he's produced Rollins's Grammy-nominated "Sonny, Please" and the just-released "Road Shows, vol. 1," both for Doxy Records.
Posted by Jazz Chill at 8:00 AM