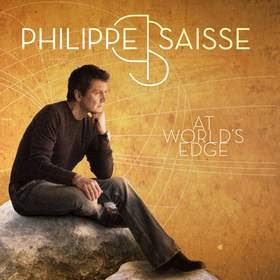 Saisse recorded the album with a basic line-up of Simon Phillips (The Who, Mick Jagger, Toto, Jeff Beck) on Drums, Pino Palladino (John Mayer, The Who, Di Angelo, Erykah Badu, Eric Clapton) on Bass, and KOCH recording artist Jeff Golub (Rod Stewart) on Guitar. Utilizing the Internet, he tapped into musicians from London, New York, and even Japan, who all recorded their parts live, and sent them to his Los Angeles-based studio, where he produced and orchestrated the project into a seamless whole. These contributors included Angélique Kidjo, Rick Braun, Jeff Beal, Kirk Whalum, Michael Davis and David Rice. The entire record was mixed with Co-producer and Engineer Goh Hotoda in Tokyo, Japan; and the result is a stunning kaleidoscope of musical adventure.

"At World's Edge" is the follow up to Saisse's "The Body And Soul Sessions" (April 2006), which included the hit single "Do It Again." The track stayed #1 on the Billboard and Radio & Records smooth jazz charts for six consecutive weeks, and finished #6 on Billboard's Top 100 Most Played Contemporary Jazz Radio Year End Chart for that year. While delivering a substantial number of follow-up radio hits that blend a smooth, lyrical vibe with rock solid jazz-funk, "At World's Edge" goes much deeper, weaving together a rich, melodic tapestry of progressive, impressionistic, and global threads. Though it doesn't offer a specific narrative concept, it's a collection that feels like a complete work, where each track contributes to a total musical journey.