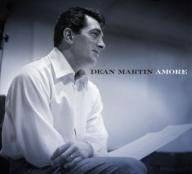 Capitol/EMI is set to release Dean Martin’s most romantic love songs which have been gathered for a mood-setting collection, Amore, to be released January 27, just in time for Valentine's Day. Amore features 15 classics, including "You're Nobody 'Til Somebody Loves You," "Just In Time," "That's Amore," "I've Grown Accustomed To Her Face" and "Dream A Little Dream Of Me."

For Dean Martin, singing came as naturally as breathing. Supple and warm, his vocals dance from breath to word as gracefully as Fred Astaire and Ginger Rogers gliding in perfect step across the parquetry. Effortlessly cool and dynamic in his life and career, Martin's performances showcased his trademark style of casual, easy charm. His timeless love songs remain universal favorites and perfect accompaniments to any romantic occasion. Martin's velvet voice provided his entry into show business, when he began singing professionally in Ohio's ballrooms. He built a loyal following and moved on to the supper clubs and cabarets of New York City, before moving to Los Angeles and signing with Capitol Records. Martin's meteoric rise to fame made him a big-screen draw and landed him acclaimed roles alongside film legends, including John Wayne and Marlon Brando.

Dean Martin is recognized as one of the 20th Century's greatest entertainers for his decades of hit recordings, films, TV shows and stage performances.