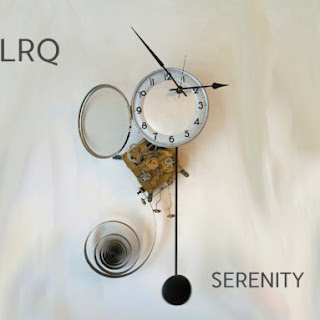 In simple and straightforward terms, Serenity, the new album by the Louis Romanos Quartet, is an utterly delightful musical experience - blending outstanding compositions, sterling musicianship and marvelous creativity at its most compelling. At a time when so much contemporary jazz expression seems to be fettered down in a bog of technical wizardry and pedantic complexity, the LRQ embraces the timeless classicism of emotional warmth, deep lyricism and the sheer undeniable joy of playing music together. Virtuosity abounds, but not to display itself to impress, but to tell captivating stories for the pleasure and edification of any listener in search of that special uplifting that only comes through joyful musical expression.

As Louis describes the LRQ’s mission… they play “original music for people who love music.” The LRQ is locked together in an exhilarating web of empathy and shared pursuit, built upon the blueprint that is laid out by Louis through his leadership with directions established by his terrific compositions and arrangements. Weaving Latin, Middle Eastern and Far Eastern influences into a jazz framework, further spiced with the unique multicultural landscape absorbed through his 15 years in New Orleans, Louis’ compositions are ideal launching points for spirited and viscerally rhythmic sonic improvisation.

Returning from the Quartet’s highly acclaimed 2015 debut album Take Me There are guitarist Dan Sumner and Alex Noppe on trumpet and Flugelhorn. Joining them on this album is the remarkable string bassist Luca Lombardi. Sumner – who goes back some twenty years with Louis to 1997 when they co-founded the landmark New Orleans duo Permagrin – is an exceptional soloist and also provides a rich backdrop to the musical canvas with his brilliant aural coloring, often evoking resonant suspended charged chords that are akin to those spidery shower fireworks that linger in the sky long after the initial burst. Noppe is a master of richly lyrical warmth whose stunning solos are sometimes marked by emphatic flairs of bent notes and serpentine coils. Lombardi’s deeply resonant sound, impeccable rhythms and imaginative vitality roots the powerful groove of the music perfectly, complementing Louis’ drumming in splendid fashion.

Romanos is truly a great drummer, always inventive, rhythmically flawless and fresh, and thoroughly musical, not only providing the ideal firmament for the improvisational journey, but fully participating in its contextual evolution. His two solos are sensational – filled with lyricism, and vibrant in groove. And when you focus on his playing throughout the entire album, there never seems to be a moment where he falls back on basic time. He is always consummately creative, consistently adding luster and sparkle that deepens the tale being told.

And wonderful tales they are, beginning with the opening piece Just Pretend. A nicely syncopated trumpet and guitar line built upon a virile bass ostinato, it features an expressive rock-tinged guitar solo, a deeply wooded bass excursion and a vividly rhythmic drum solo spiced by afro-beat guitar, joined by the bass to bring it to climax. Funk is the flavor on Funkle Lou, rooted in a N’Orleans street beat, and also reminiscent of the classic hard bop funk of 60s Blue Note (including a long sustained bent bass note a la The Sidewinder). Luca also rips out a superpizzicato solo that would make Bootsy Collins smile. Alex’s plunger-muted trumpet sings out viscerally talking-blues in that Clark Terry/Cootie Williams mode, swinging mightily over souldrenched guitar, fervid bass and sparkling drums. Louis’ concluding solo is deeply funky with throbbing bass drum and singing toms.

Bossa is the groove for Klozola with genteel acoustic guitar and opulent arco bass setting the tone for Flugelhorn like the gentle warmth of a light tropical rain as it states the lovely and sensuous theme. Jobim-channeling guitar and sonorous Flugel solos add to the delectable texture.

Another gentle and soothing item is Take a Hike with its circular, almost rondo-like melody, deliciously sung on Flugelhorn and featuring a sonorous bass solo and a stately turn by Alex. Two beautiful ballads are included as well. The enchanting Home Again is offered by Flugelhorn and guitar slow-dancing in tight embrace, wrapped in the arms of sumptuous bass. Emotive and poignant guitar and Flugel solos further enhance the mood. Serenity in Dissolution is a lovely piece stated radiantly by Dan’s touching guitar, and includes his ballad/bluesy solo, warmly sensitive Flugelhorn, and swirls into a wonderfully atmospheric collective pastiche at its climax.

With a boogaloo style groove in homage to drum master Idris Muhammed, Old Soul features an intricate, but totally lyrical trumpet/guitar unison theme cooked in an intertwined bass/drums staggered rhythmic tandem, all culminating with brilliantly overlaid trumpet and guitar solos. Song for Charlie is a unique departure from the rest of the album. Launched by Louis alone, he’s joined by Alex’s plunger-muted trumpet for a fascinating two-man musical conversation filled with drama, wit, a bit of sarcastic repartee and even an occasional dirty joke here and there.


This wonderful album not only has something for everybody, it has everything any fan of great music could want.