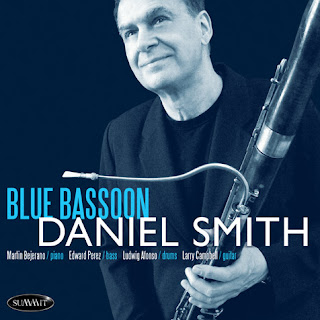 Blue Bassoon offers up thirteen solid tracks of bebop, post-bop and blues standards and gives each respective composition a workout. The sound of the bassoon is entirely different than other traditional jazz instruments and the jazz standards presented on the recording take on a new look and sound that is both refreshing and inviting. Smith is joined by outstanding backing musicians such as Martin Bejerano (piano), Edward Perez (bass), Ludwig Afonso (drums) and Larry Campbell (guitar). Each player reaches the necessary level of competence to match the featured artist note for note. Recorded in NYC with an all-star band including Martin Bejerano on piano, Edward Perez on bass, and Ludwig Afonso on drums, the album also features Bob Dylan's guitarist Larry Campbell as special guest artist on two early-blues selections (*).
The New York Daily News says that Daniel Smith is the greatest bassoon player of his generation. That says it all coming from a publication in a city that serves as the hotbed of jazz for a worldwide audience. With his many critically acclaimed award-winning recordings and live performances, Daniel Smith is the most recorded bassoon soloist in the world, with a repertoire spanning music from jazz to classical and crossover. As the only bassoonist performing and recording in both jazz and classical, his unique career has been profiled in numerous publications throughout the world; described by critics as the 'Gerry Mulligan of the Bassoon' in the world of jazz and the 'Rampal of the Bassoon' in the world of classical music.
In the world of classical music, Daniel Smith's historic box set of the complete 37 Vivaldi bassoon concertos was chosen as 'Best Concerto Recording of the Year' by the Music Industry Association. His highly acclaimed jazz albums Bebop Bassoon and The Swingin' Bassoon (Zah Zah) were followed by Blue Bassoon and Bassoon Goes Latin Jazz! (Summit). Other recordings of Daniel Smith can be found on Vox, MHS, KemDisc, Pearl, Spectrum, Cambria, Regis, Crystal and Forum.

Noteworthy performances include premieres of Gunther Schuller's 'Concerto for Contrabassoon and Orchestra', Steve Gray's 'Jazz Suite for Bassoon and Orchestra' and Robert Farnon's jazz-oriented 'Bassoon Concerto'. Smith has presented solo concerts at New York's Lincoln Center and the Tivoli Concert Hall in Copenhagen. His many recordings are heard throughout the world on jazz and classical radio stations, National Public Radio in the USA and on major airlines for in-flight listening. Daniel is also featured with leading book and record clubs and the Muzak network.

Daniel Smith was voted a 'Rising Star' by the Downbeat critics poll and nominated twice by the Jazz Journalists Association as finalist for their 'Player of the Year' award in the category of 'Instruments Rare in Jazz'. He had earlier been chosen as 'Ambassador for the Bassoon' in Great Britain.

In 2012, Universal Music will be re-releasing his classical and crossover albums on digital for downloading on the Internet. Daniel Smith will also premiere Brazilian composer Joao MacDowell's 'Brazilian Jazz Concerto for Bassoon and Chamber Orchestra'.