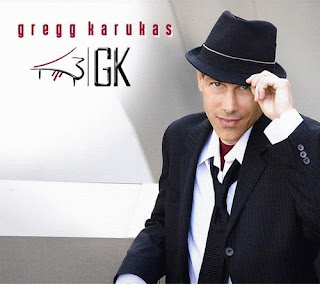 Gregg Karukas' 11 solo CD's have garnered consistently solid reviews for his signature piano touch, pristine production, and melodies that are both soulful and sophisticated. GK is his latest project on Trippin Records. In addition to being one of the few Smooth Jazz artists that writes and produces his own solo, Gregg has a solid track record contributing to the careers of many others over his 3 decades on the Contemporary Jazz and TV/Film music scene as Producer, Songwriter/arranger, Musical Director and Keyboardist. Gregg has received multiple Best Keyboardist nominations at the Oasis and National Smooth Jazz Awards. In 1987 he became the original keyboardist with the Rippingtons, recording the classic Moonlighting project with Kenny G. and David Benoit. Gregg recommended Dave Koz to play EWI on the Moonlighting record and the rest, as they say, is history.
In 1987 he released his first solo album The Night Owl, which quickly became a Quiet Storm radio staple w/the songs "Walkin' With You", "Talbot Street Cafe" and "Drivetime." He has also been a popular guest artist on tours with Boney James, Peter White, Eric Marienthal, Ricardo Silveira and Larry Carlton and has produced a vast array of artists at his own Nightowl Studios, including Kirk Whalum, Peter White, Craig Chaquico, Phil Sheeran, Gabriela Anders, The Pointer Sisters and crossover pianist David Lanz. As a songwriter, his tunes have been recorded by Richard Eliott, George Benson, Chaquico, Arnold McCuller, Pauline Wilson, Kenia and Deniece Williams.

Those fruitful all-star associations are only the beginning of an amazing journey that would later find the married father of two boys firmly ensconced in the world of his first true musical love, Brazilian music. In this genre, Karukas has toured and recorded with Sergio Mendes, Ricardo Silveira and Dori Caymmi. A career highlight came in 1992 at the Hollywood Bowl when he added his multi-keyboard orchestrations to the music of Toots Thielemans and Brazilian legends Ivan Lins, Caymmi and the late Antonio Carlos Jobim.

Karukas feels lucky to work with singers and musicians whom he feels a magical musical rapport with. "People say my music sounds romantic and uplifting - and I look so happy on stage, he says. It's totally true. For me, the best music comes out of an inner feeling of either intense happiness or sadness. I always try to stay faithful to that original inspiration, because that is where the true sound of emotion' comes from.

"I think we all need music to be the soundtrack to our soul," Karukas adds. "It can inspire us, balance out our lives and relieve stress. I appreciate that and I treat each CD or concert as another opportunity to connect to those sounds and emotions on a deeper level. I love sharing that with others and try to make each project a special event all its own."
Posted by Jazz Chill at 2:10 PM