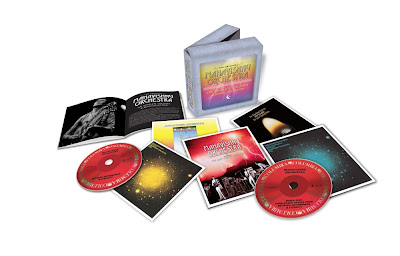 The Mahavishnu Orchestra, in its original incarnation, lasted just four years, but in that brief time, the pioneering quintet set both the template and the high-water mark for fusion music. No band ever rocked as hard in a jazzy place as guitarist John McLaughlin’s charging ensemble. McLaughlin had already built a firm reputation in his native England as a keen improviser with blues and rock leanings when he was invited by drummer Tony Williams in early 1969 to join him in New York. Almost immediately, McLaughlin was swept up into the very epicenter of the burgeoning fusion movement, appearing on – in 1969 alone – three of the genre’s most significant recordings: Emergency! (by the newly-formed Tony Williams Lifetime) and In a Silent Way and Bitches Brew, the epochal Miles Davis albums that kick started fusion. When it was time for McLaughlin -- who, in his initial New York stay, had quickly developed from a gifted player to a brilliant one -- to form his own band, he brought together musicians who could apply full-force rock energy to improvisatory jazz skill. Keyboardist Jan Hammer, violinist Jerry Goodman, and drummer Billy Cobham were each extravagant virtuosos eager to match McLaughlin at his own game; bassist Rick Laird contained the passion with his steady bass lines. Dubbed the Mahavishnu Orchestra, the new band released its debut recording, The Inner Mounting Flame in August of 1971: fusion as we know it was now fully born. Younger listeners raised on rock responded to the band's vitality and extraordinary musicianship; before long The Mahavishnu Orchestra was appearing with the likes of The Byrds and Aerosmith. Subsequent hit albums built on The Inner Mounting Flame’s innovations; Hammer added synthesizers to his arsenal, developing a keyboard style nearly as influential as that of McLaughlin’s frenetic guitar work and Cobham’s rumbling percussive attack. But it was nearly inevitable that the life span of such a dynamic ensemble would be brief. The Mahavishnu Orchestra threw down the gauntlet; fusioneers who followed have been trying to catch up ever since.
• 2011 marks the 40th Anniversary of the founding of the band and its signing to Columbia Records.

• Features the original classic line-up of the band led by John McLaughlin -- and including Billy Cobham, Jan Hammer, Jerry Goodman and Rick Laird. 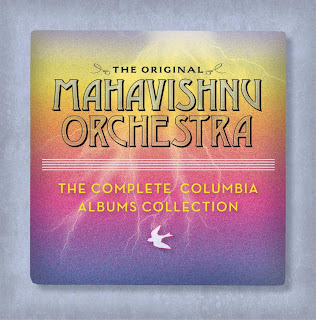 • Smash hit albums The Inner Mounting Flame and Birds Of Fire are here, along with the band’s only live album Between Nothingness And Eternity, plus the rare The Lost Trident Sessions.
• Also contains the very rare bonus track, a 15 minute live version of “Noonward Race” from the Mar Y Sol Festival in 1972 in Puerto Rico.
Albums included:
1. The Inner Mounting Flame (1971)
2. Birds Of Fire (1973)
3. The Lost Trident Sessions (1973)
4. Between Nothingness and Eternity (1974)
5. Bonus Disc: Between Nothingness And Eternity [Disc 2] All tracks previously unreleased
Posted by Jazz Chill at 10:06 AM

As a longstanding MO fan since I first heard them 1972, I had to get this as soon as I found out about it. The recording of the Between Nothingness and Eternity bonus material is first rate, and the performances are very good and nothing like any other live (bootleg) material that I have heard previously. The Mar-Y-Sol recording is also worth having (I had the vinyl record way back in the day....it would be a real find to get the rest of THAT set as well). My only quibble is the box set is a bit pricey, as all the other material here is available at very low cost as single albums. BNAE could have been released as a two-disc set years ago.

I completely agree with "faceless critic". I paid $45 to essentially buy the bonus disc of BN&E. It is great, but I did not need to rebuy the other albums. However, they do appear to have been remastered again, resulting in more clarity between the instruments. I do have an actual gripe: "The Noonward Race" from Mar Y Sol has been issued without any editing (fine) but it too has been remixed and the killer guitar solos at the beginning and end of the performance are now buried under the drums...I much prefer the original album mix. So if you have a clean vinyl copy of Mar Y Sol, don't bother buying this set for that piece. ...my opinion...
ED

They are my favorite band but I'm not sure I can justify the outlay for an extra disc.