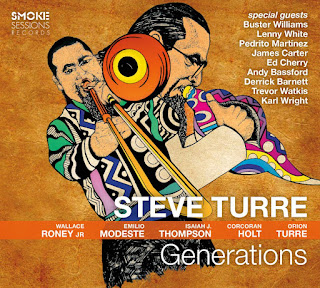 Trombonist and composer Steve Turre was passed the jazz torch early in his career by some of the music’s greatest masters – Art Blakey, Rahsaan Roland Kirk, Woody Shaw, and Ray Charles, among others. In recent years he’s kindled the same flame in a younger crop of rising stars. On his new album, Generations, Turre brings the eras together, inviting still-vital legends to join a gifted band of fresh blood while paying tribute to the elders who have helped shape his sound.

Set for release on September 16 via Smoke Sessions Records, Generations features literal second-generation players including the trombonist’s own son, drummer Orion Turre, as well as trumpeter Wallace Roney Jr., whose late father was a close friend and collaborator of Turre’s. In addition, the core band includes young pianist Isaiah J. Thompson and the more tenured Corcoran Holt on bass, who has been working with Turre for more than a decade.

Over the course of the album this stellar group is joined by the likes of saxophonist James Carter, guitarists Ed Cherry and Andy Bassford, keyboardist Trevor Watkis, bassists Buster Williams and Derrick Barnett, drummers Lenny White and Karl Wright, and percussionist Pedrito Martinez.

“There's a balance between youth and age,” Turre says, “Age brings wisdom and knowledge, and youth brings enthusiasm and energy. Playing with each of them stretches me in a different way. The elders stretch me in ways of wisdom, but the youngsters fire it up. All of that is inspiring.”

That inspiration bears fruit in one of the most scintillating and eclectic recordings of Turre’s storied career, ranging from burning modal jazz to tender ballads, sophisticated swing to reggae grooves to Latin rhythms, and of course, at the root of everything is the blues. “The blues don't never get old,” Turre declares. “I like playing the blues. To me, it's quintessential to American music.”

The most straightforward blues on the album comes in the form of “Blue Smoke,” a tip of the horn to Turre’s home label for his past four releases and its namesake club, where he’s a regular performer. The tune pairs the trombonist with guitar great Ed Cherry, a fellow alumnus of the Dizzy Gillespie band.

The album opens with the searing “Planting the Ceed,” an homage to Cedar Walton. “He’s one of my heroes,” Turre says of the great pianist, who was a member of Art Blakey’s Jazz Messengers when Turre joined the band in 1973. The tune is highlighted by a bold and serpentine tenor solo by Modeste. “I didn't set out to write a tune for Cedar, but it made me feel a similar kind of feeling that I used to get when I played with Cedar. And he planted the seed in me when I was young and started playing with him.”

An even earlier influence was Duke Ellington, the honoree of the elegant “Dinner with Duke.” Turre had the opportunity to see the iconic bandleader in concert when he was in the fourth grade. “My parents took me to Oakland Auditorium to see Duke in 1957, when I had just started playing the trombone,” he recalls, still marveling at the experience. “He had Johnny Hodges, Clark Terry and Britt Woodman in the band, Coleman Hawkins was the guest soloist, and Ella Fitzgerald was a guest vocalist. I didn't know what they were doing, but it blew my mind. That was it. I said, ‘Man, I'm gonna do that.’ It just made me feel good.”

For “Don D.,” a tribute to the legendary Skatalites trombonist Don Drummond, Turre convened a reggae summit meeting with guitarist Andy Bassford, bassist Derrick Barnett, drummer Karl Wright and keyboardist Trevor Watkis. The searching “Pharoah’s Dance” is a joint tribute to saxophone titan Pharoah Sanders and the genius pianist McCoy Tyner, both of whom have been collaborators with the trombonist over the years. Roney’s bristling solo is buoyed by Pedrito Martinez’s rollicking percussion.

The album’s sole standard is a simmering rendition of the classic “Smoke Gets in Your Eyes,” Turre showcasing the supple grace of his playing on the wistful melody. “I'd never heard a trombone play that song,” Turre says. “But I didn't want to do it the same way everybody else does it so I put a little bit of African 6 [6/8 rhythm] to it, which is where swing comes from. That gives it a very tranquil mood. It's more relaxed than the hard-hitting tunes, so it's a nice release of tension.”

“Flower Power” shines the spotlight on Turre’s famed conch shell virtuosity on a mesmerizing, elusive new piece. “It’s kind of a dreamy journey,” Turre describes with a grin. “You start out on your first steps with the bass, you go on a musical journey, and then your last steps end with the bass. I told the horn players, ‘I'm gonna play for a while, both with the trombone and later with the shells, then you join me and we'll make it a conversation.’ It was completely spontaneous and it's totally different every time. That's the thrill of discovery.”

The Latin-influenced “Good People” is a tune that Turre has had in his book for years and finally decided to record. It’s enlivened by the presence of the brilliant percussionist Pedrito Martinez. “Sweet Dreams” is a gentle ballad graced by Orion’s feather-light brushwork, a breathtakingly eloquent bass solo as only the mighty Buster Williams can provide and an intimate and soaring turn from the always masterful James Carter on tenor.

“Resistance” brings the album to a vigorous conclusion with a determined composition penned at the time of the tumultuous 2016 election, though it’s taken on a broader and more urgent meaning in the years since. “It's tough times,” Turre says. “This song is about resisting all the negative forces that we must encounter in the world today.”

The generations of remarkable musicians joining forces on Generations prove that the music’s bloodline remains strong. “I always like to play with musicians that challenge me,” Turre concludes. “So, coming up, I would usually play with people older than me. My challenge now comes from the youthful energy of the younger players. Jazz is not dead.”