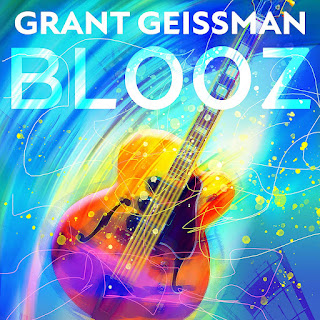 Mesa/Bluemoon Recordings has announced the release of veteran guitarist and composer Grant Geissman’s new album Blooz, out August 19, 2022.  The twelve instrumental tracks are a collection of original blues and jazz songs, performed by a stellar supporting cast of musicians. Geissman comments: “On Blooz, with the help of great friends and incredible musicians, I had some of the most fun and made some of the best music of my career.  It’s the album I have always wanted to make.”

The gospel-oriented “Preach” (featuring Randy Brecker), the Latin-influenced, Santana-inspired ‘Carlos En Siete” (featuring David Fairfield), the funky “Robben’s Hood” (featuring Robben Ford), the blues shuffle ‘This and That” (featuring Tom Scott), the mournfully bluesy ‘Sorry Not Sorry” (featuring Russell Ferrante), the rockabilly-styled ‘Whitewalls and Big Fins” (featuring John Jorgenson), and the Bo Diddley-inspired, three-guitar shootout “One G and Two J’s” (featuring Josh Smith and Joe Bonamassa) come together to form a project that might just surprise listeners who think they had a handle on Geissman both as a player and a composer.  Blooz showcases Geissman’s new creative directions and limitless musical prowess.

California-born Geissman’s storied carerr took off in late 1976, when he was asked to join Chuck Mangione’s band. The first album Geissman recorded with Mangione was Feels So Good, a platinum-selling album containing the mega-hot song “Feels So Good,” featuring an iconic guitar solo by Geissman.  Geissman’s career as a session guitarist has been prolific and includes work alongside many of music’s greatest, including Quincy Jones, Ringo Starr, Steve Tyrell, Burt Bacharach and Elvis Costello, Klaus Voormann, Gordon Goodwin’s Big Phat Band, and David Benoit.  Geissman’s pop and jazz solo work in the 1980 also helped define the contemporary instrumental music of that era.  Geissman released four albums with Mesa/Bluemoon in the early 1990s, and label president George Nauful notes: “In 33 years of running the label, I can honestly say that Grant’s releases are among my very favorites. And now I love every track on this new album!  All the compositions and the musicianship are off the charts.  We are very excited to be working with Grant again.”