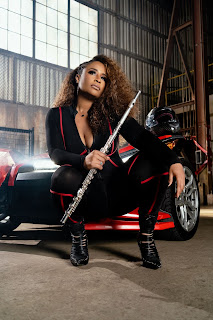 Contemporary jazz flutist Ragan Whiteside's current single, “Thrill Ride,” leaps to the Top 10 at No. 9 on the Billboard Smooth Jazz chart after only 11 weeks on the chart. The single is her eighth consecutive Billboard Top 10 single. Filled with joy and excitement about the news, she said, “I swear this never gets old.”

“Thrill Ride” is the title track from her forthcoming album, set for release on August 26, 2022, on her label, Randis Music. Written and produced by Dennis Johnson, Bob Baldwin, and Whiteside, the single features guitarist Phil Hamilton and drummer Richard Harrison, also known as the artist RAH.

The music video of “Thrill Ride” has a light-hearted, comical storyline, following Ragan on her impromptu stroll before her show. After getting dolled up by her glam squad, Ragan takes advantage of some downtime and ends up engaging in various thrill rides, skydiving, and a scooter sojourns around the neighborhood. Ragan returns to the show venue a little worse for wear – much to the chagrin of her glam squad.

Though the pandemic resulted in two challenging years for Whiteside, 2021 still proved to be a successful year for her previous hit single, “Off The Cuff,” where it spent 17 weeks on the charts and peaked at No. 7 on the Billboard Smooth Jazz Airplay chart. The single also reached No. 5 on RadioWave, No. 3 on Media Base, and No.5 on Smooth Jazz Network. “Off The Cuff” will also be featured on her forthcoming album.

Meanwhile, her four-hour Saturday radio show (10:00 a.m. – 2:00 p.m. ET), “Saturday with Ragan Whiteside” is the No. 1 Saturday show on Atlanta’s NPR affiliate radio station Jazz 91.9 WCLK. The broadcast is also the No. 2 show behind the gospel show, “Joy In The Morning.”