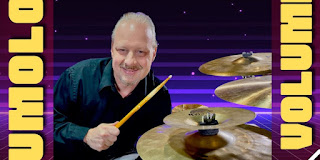 Drumology, Volume II, due out August 12 from Autumn Hill Records, features drum greats from jazz, fusion, prog and rock including Billy Cobham, Mike Mangini and Todd Sucherman, along with an all-star band including keyboardists Michael Silverman and Jay Oliver, guitarist Dweezil Zappa and bassist John Patitucci, among others.

When Rob Silverman enlisted a who’s who of fellow drum masters for 2020’s critically acclaimed summit meeting Drumology, it felt like a once-in-a-lifetime opportunity. Fortunately, this lifetime has turned out to be big enough – and the community of virtuoso drum greats large and tightknit enough – that Silverman is back this year with not one but two sequels.

Due out August 12, 2022 via Autumn Hill Records, the exhilarating Drumology, Volume II not only features an astounding roster of drummers and other special guests, but it also expands its predecessor’s purview beyond the realm of jazz and fusion into progressive rock. Drumology, Volume III will follow later this year. As with the original album, all proceeds will benefit the Neil Peart Fund for brain cancer research at Cedars-Sinai Medical Center.

A notoriously competitive bunch, drummers from across the musical spectrum reached out to Silverman after the release of Drumology, each seeking to challenge their own formidable chops. “For volume one we had to chase drummers down,” Silverman recalls. “This time out, drummers were coming to me. Before we knew it we ended up with enough material for two albums.”

The songwriting on Volume II benefited from the brothers’ earlier experience, according to Michael. “We got much better at tailoring the music to the personalities of the various drummers. We wrote these songs to give the guest artists plenty of latitude to interject their own personalities by crafting the kinds of tempos, grooves and feels that the different drummers prefer.”

That tailoring is evident from the outset, as the soaring, anthemic “Victory” kicks the album off at full throttle. Pairing Silverman with Mike Mangini and his Dream Theater bandmate John Myung on bass, the tune revels in the odd time signatures and complex but propulsive rock sound associated with the modern prog-masters – and with everyone’s mutual influence, Rush.

The mesmerizing “Sea Spray” then veers into fusion territory with a very Mahavishnu-esque sound achieved by the drummer and violinist of the iconic John McLaughlin-led ensemble, Billy Cobham and Jerry Goodman. They’re joined by fellow fusion veteran John Patitucci, charter member of both Chick Corea’s Elektric and Akoustic Bands.

Silverman and Kenny Aronoff provide the invigorating pulse for the epic “Timber Falls,” which conjures the image of towering evergreens and rushing waterfalls via Eric Marienthal’s majestic melodies and Dweezil Zappa’s sublime guitar solo, channeling the layered harmonies of Queen’s Brian May.

“Avalanche” ups the ante with a THREE-drummer collision featuring Silverman, Casey Grillo and John Spinelli. If that wasn’t enough, their interwoven rhythms fuel a master class in neoclassical shredding from the incredible Michael Angelo Batio. The maniacal laugh that erupts just before the one-minute mark perfectly captures the mood of glorious excess.

Michael Silverman’s keyboard intro is reminiscent enough of classic Styx to make Todd Sucherman feel right at home on the glittering prog track, highlighted by a joyously funky Marienthal solo. The evocative “Moving Mountains” follows, with Silverman switching to percussion alongside Glen Sobel’s drumming for a track that scales the heights of an exotic mountaintop landscape.

The bracing “Drum Dreams” ends the album on a hard-charging high note with Silverman and David Frangioni accompanied by both Silverman and Oliver on keys. The piece was inspired by a visit to the Modern Drummer Hall of Fame Museum, during which Silverman and Frangioni test-drove a number of iconic drum kits. (The experience inspired a contest in which the magazine asked readers to name each of the drummers represented in the “Drum Dreams” video.)

The stunning Drumology, Volume II is a drum aficionado’s dream come true (for a second time!) and best of all, it benefits a good cause in the name of one of the instrument’s Mount Rushmore figureheads. Legendary Rush drummer Neil Peart died in January 2020 of glioblastoma, an aggressive form of brain cancer.

“I first heard Neil Peart in 1976 when I was taking drum lessons as a kid,” Silverman recounts, still marveling at the occasion. “I heard his live drum solo on ‘Working Man’ from the album All the World’s a Stage, and it completely changed my whole perception of what is possible on the drums. I decided then and there, that’s what I want to do when I grow up. This is my chance to give back for that life-changing influence.