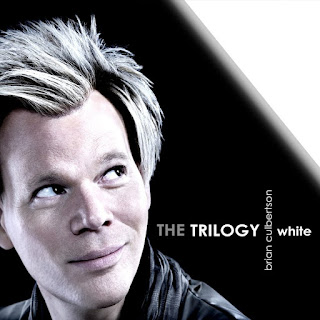 The three-phase arc of a longtime relationship serves as the muse of R&B-jazz hitmaker Brian Culbertson’s trilogy of instrumental albums that he wrote, produced and performed with creative input from the 800-plus members of his Hang Club. On Friday (May 6), the third disc in the series, a collection of hopeful songs titled “The Trilogy, Part 3: White,” drops on the BCM Entertainment label. It’s Culbertson’s 25th album that to date has launched nearly forty singles to shoot to number one on the Billboard chart.

Culbertson composed the thirty songs that populate the three albums thematically along what he describes as the three-part arc of a long-term relationship: the hot and steamy “falling in love” phase, the rocky middle when perhaps they even break up for a bit, and the couple reunites to live “happily ever after” phase. The first album in the series, the sensual and romantic “Part 1: Red” was released last October and the second set, the melancholy “Part 2: Blue” streeted in January. “Part 3: White” is slightly more diverse stylistically with the uplifting urban grooves, nuanced contemporary jazz and shimmering pop songs fostering feelings of hope as the relationship thrives and endures.

All three albums in “The Trilogy” were crafted with input from the Hang Club, a tiered membership program via Patreon that Culbertson formed in 2020 tied to the weekly Friday night show that he streams live on YouTube. Hang Club members were granted exclusive behind-the-scenes access into every aspect of Culbertson’s creative process: from songwriting, arranging, recording, producing and mixing.

“I knew it would translate live because the song has real guitar, real bass, a lot of percussion. I had (drummer) Chris Miskel lay a simple groove down and it really turned out nice on stage,” said Culbertson, who has concert dates booked through November to support the album series.

Something different for Culbertson on “Part 3: White” is “Dance With Me Tonight,” which opens with a clubby pulsating beat before breaking into a festive salsa rhythm lavishly decorated with layers of percussion, horns and breathy flute accents by Althea Rene.

“I kept hearing more and more stuff in my head on ‘Dance With Me Tonight’ so I just kept adding it. The last piece of the puzzle that I added was Althea on that rhythmic flute-vocal thing that she did. As a producer, I go where the song takes me. I’ve never had a song that was asking for all that (instrumentation) before. This one asked for it. I’m not going to say no so I just did it. It’s a fun song. I threw the kitchen sink in on that one,” laughs Culbertson, who will be hosting the ninth annual Napa Valley Jazz Getaway in California Wine Country from June 8-11, the sold-out festival that he founded, curates and headlines.

Culbertson voraciously explores and incorporates innovate sounds and technology into his recordings, which is heard in the lush sonic design he architected for “Part 3: White.”

“One of the new palettes that I tapped into on this particular album is analog synthesis where there’s a whole slew of new instruments that have recently been put on the market that are in essence a nod to the late 1970s/early eighties analogue synthesizers with modern technology implemented. What that means is I use a lot of these new sounds that add serious warmth and this human feel to a synthesizer that modern digital synthesis don’t have. For instance, there is a song on the album called ‘Sandcastles.’ There is a part after the first verse, this big swell of a pad like a big ocean current. If you really listen to it, it’s this massive, huge sound and there’s weird little inconsistencies in each note. That only happens with really analog circuitry. With digital, it’s too perfect. These synthesized sounds become like a real instrument, like a piano, like a saxophone. These were some new sounds that I was exploring on the whole album,” said Culbertson, who has begun work on a bonus fourth disc comprised of alternate versions, different mixes and several live tracks from “The Trilogy” for his first box set that is slated for release later this year.

As “White” arrives, Culbertson hopes people will listen to all three parts of “The Trilogy” as a whole, one project as opposed to three individual albums.

“Hearing the three albums in a row provides the context. All the songs on ‘Red’ were clearly about passion and love. ‘Blue’ is melancholy and sad songs, breakup songs and ‘losing people’ songs. Once you get to part three, ‘White’ is all about songs that have an uplifting feel to them. Emotionally, they all feel similar even though they are stylistically broad,” said Culbertson’s whose own long-term relationship, his marriage, will celebrate a milestone 25th anniversary in October.