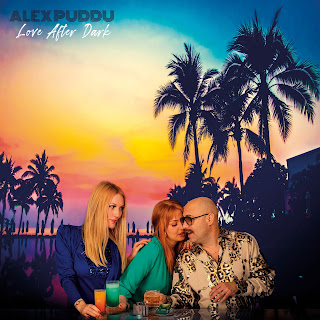 Recording artist Alex Puddu, well-known especially for his discosex-funk soundtrack trilogy The Golden Age of Danish Pornography and for his music collaborations with artists such as Joe Bataan, Lonnie Jordan (War), and Gene Robinson Jr.(Breakwater) is ready with his 12th album Love After Dark.

Exploring the nightlife of 1977-79 and early 80s of disco, jazzfunk, and adult oriented soul and pop music. A set of songs written, arranged and produced by Alex Puddu and recorded in South Florida together with a local team of talented session musicians. Love After Dark is definately a step-up from Alex’s latest work Discotheque not only for further improving the sound with a great production and accurate arrangements, but also for developing and re-inventing himself as the strong songwriter he is, not only musically but also lyrically. Songs like ”Shadow Dancer”, ”Lady Tonight”, ”Body Heat”, ”Catch The Wave or Die”, ”Strangers on the Beach” and ”The Long Road” are proof of that.

The album was recorded In South Florida at DogManic Recording Studio, Enginereed by Jason ”Jedi ”Sedawie and mixed in Germany by Rob Hardt (well known from the nu disco-boogie producer team Cool Million) and Kamilo Kratc in New York City. The singles from the forthcoming album – ”Shadow Dancer”, ”Body Heat”, ”Only For Men”, ”Adult Games” and ”Lady Tonight” – have already had a major impact at UK soul radio stations.