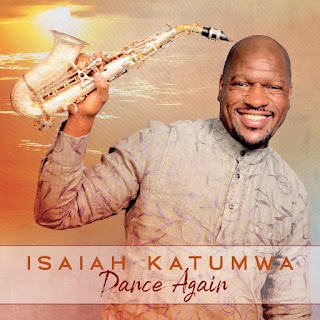 As COVID-19 raged last summer and tension soared in the wake of the civil unrest that erupted after the death of George Floyd that occurred miles from his home, saxophonist Isaiah Katumwa was at work on his first major US release that he envisioned lifting spirits by uniting the world in dance. The Ugandan-born artist felt that to confront global issues - a pandemic and systemic racism – it would take a global response. Katumwa assembled a collective of African, American and Latin musicians to help craft “Dance Again,” the global jazz album dropping July 9 from Beyond Music. The festive African beat title track led by Katumwa’s agile soprano sax goes for playlist adds as a single on Monday.

Katumwa wrote or co-wrote all ten songs on “Dance Again,” each of which is brimful of joyous light and sunny optimism. Fellow saxophonist Darren Rahn, a multiple GRAMMY nominee who has produced more than 25 No. 1 singles, produced six tracks for the set, and Billboard chart-topping guitarist Adam Hawley produced three. Rwandan producer Marc Kibamba helmed “The Sun Will Shine Again,” a jubilant African rhythmic groove illumined by a vocal chorus.

“During the scary times of the pandemic and when people took to the streets in anger to protest, I often wondered whether we’ll ever dance again in unity. It had become a very strange thought. ‘Dance Again’ is an answer to share positivity and contribute to the healing process that we all need right now. It’s music with the purpose to help us as we recover, which I believe is one of the purposes of music,” said Katumwa.

The seeds for “Dance Again” were first planted a couple years ago when Katumwa wrote and recorded “Home Away” with Rahn, a sweetly melodic composition that referred to Katumwa’s quest to find an artistic balance between making commercial instrumental music in America while remaining true to his African roots. Last year, Katumwa and Rahn collaborated on the radiant “Smile On,” which was issued as a single last May.

“When we dropped ‘Smile On,’ it was to add positivity, to use music to bring light to the world in our dark times. It’s a reminder that no matter what challenges life brings, we can always use our ability to smile as a resource to uplift and encourage,” said Katumwa of the single that earned most added status at Billboard for three consecutive weeks.

Coronavirus restrictions forced Katumwa and his collaborators to write and record remotely. But that didn’t dampen his excitement about recording with sax superstar Dave Koz.

“The format and nature of the recording process was very interesting, working remotely throughout the entire process. The highlight for me through the many special moments of working with Darren and Adam in the process was my longtime idol, Dave Koz, agreeing to be featured on the album. His alto sax work on the Afropop fusion track ‘Nsiima’ was magical. Nsiima means grateful and for me, that sums up my musical journey thus far along with being grateful for the opportunity to record with my idol. Looking at the bigger picture, I’m grateful to be making it through the pandemic alive,” said Katumwa.

Katumwa released numerous gospel-flavored recordings in Africa in the early 2000s. His 2006 release, “Sinza,” was his first as a mixologist serving a blend of African and contemporary jazz. The saxman’s 2016 disc, “This Is Me,” received international airplay and included a mix by Rahn on the cut “Pamojja,” which was the first time they teamed up. “Dance Again” is Katumwa’s first collection recorded specifically with the US market in mind.