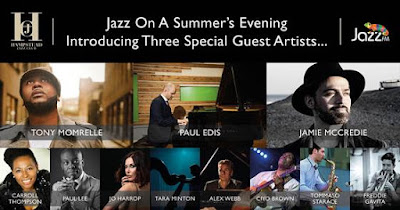 Hosted by Jazz FM’s Nigel Williams, Jazz On A Summer’s Evening will take place at London’s Cadogan Hall on Saturday 5th June in front of a socially distanced audience. Today it has been announced a further three musicians, Tony Momrelle, Paul Edis and Jamie McCredie will join the exciting line up of brilliant artists. For those who can’t be there, this very special show will also be streamed live around the world, mixing a perfect summer cocktail of classic jazz.

Jazz FM will broadcast the concert shortly after the event available in the UK on digital radio, smart speaker, on DTV and on the app.

One of the leading creative musicians in the UK today. As a performer, composer and educator, he has built a reputation for consistently delivering new and original ideas, seeking to innovate within his work whilst always paying respect to both the Jazz and Classical music traditions. In whatever genre or musical context he inhabits, Paul is passionate about melody and expression.

One of the busiest touring & session guitar players in the U.K, Jamie McCredie has played on countless film and T.V. dates all around the world, while playing/recording with a host of household name artists such as; Will Young, Robbie Williams, Joss Stone, Beverly Knight, Tokio Myers, Kid Creole, Roisin Murphy, Don Was, Johnny Hates Jazz, Simple Minds, Jools Holland, Melody Gardot, the X-Factor final, and Britain’s Got Talent – to name only a small selection.

Having cut her teeth working with everyone from Melbourne Opera to Björk, Australian-born singer and jazz harpist, Tara Minton, is the missing link between Joni Mitchell and Dorothy Ashby. She has just released the critically acclaimed Please Do Not Ignore The Mermaid, an astonishingly adventurous impressionistic dreamscape of an album.

Jo Harrop is one of the brightest new stars in the jazz universe. Described by BBC 6 Music’s Iggy Pop as “a very fine jazz singer,” she has a velvety voice that can melt the stoniest of hearts. Having received a raft of rapturous reviews for 2020’s Weathering The Storm album, recorded with Jamie McCredie, Jo is preparing to release her debut solo album this autumn.

Known the world over as The Queen Of Lover’s Rock, Carroll Thompson first burst into the spotlight 40 years ago with her ground-breaking million-selling debut album, Hopelessly In Love. Having worked with everyone from Stevie Wonder to Michael Jackson, Thompson is one of the most unmistakable voices in music. She will be showcasing songs from her forthcoming Where Did Our Lovers Go, a celebration of her lifelong love of jazz.

Perhaps best known for his unforgettable performance of Stand By Me at the wedding of Prince Harry and Meghan Markle, Paul Lee’s deliciously soothing gospel tones are the perfect tonic for these difficult times.