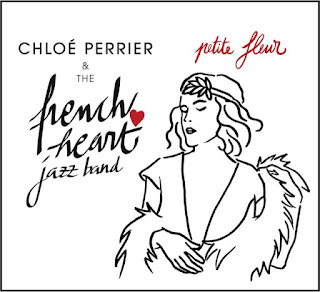 A true musical citizen of the world, French born, NYC based vocalist Chloe Perrier has one goal every time she and her French Heart Jazz Band take the stage at clubs throughout Manhattan - to make people happy and transport them away from the chaos and stress of life in the modern world. Drawing from such influences as Josephine Baker, Ella Fitzgerald and Blossom Dearie, the singer uses her velvety voice, spellbinding style and charming accent to transform any room she plays into a realm harkening back to the golden age of jazz.

Holding court onstage these past three years at venues as Club Bonafide, Cornelia Street Café and the McKittrick Hotel, Chloe and her “dream team” of musicians dive deep into a repertoire of French “chansons” and American jazz standards from the jazz age, taking their audiences on a journey back in time for a soul transportive experience she playfully describes as “Gatsby in Paris.” The idea sparked in 2016, when the Consulate General of France invited her to put together a “Gatsby themed soirée” to celebrate the 90th anniversary of its residence on Fifth Avenue. Chloe eventually built an entire show around the concept.

Now, with her new album Petite Fleur, released and distributed worldwide by the independent label Jazzheads, Chloe brings her alluring Parisian charm beyond the Big Apple for the first time. The October 22nd drop of the album will be celebrated with a party and performance at The Cutting Room, and prior to that, the album's lead single “Comes Love” and its music video -- created by Chloe and Los Angeles based cinematographer Jesse Green -- will premiere on September 13th. Simultaneously, Chloe and the French Heart Jazz Band will be performing at the Sunset-Sunside jazz club in Paris.

Before moving to New York from Paris six years ago to develop her career as a singer and actress, Chloe had already visited the city, working on an arts-related documentary. While she was gathering footage of the daily lives of New York based artists, she met guitarist Akira Ishiguro, who later introduced her to drummer Rodrigo Recabarren: the chemistry was immediate and she launched her first trio – which ultimately evolved into the French Heart Jazz band, when upright bassist Jim Robertson was added to the band.

The album’s tracks in English include a classic of the Django Reinhardt repertoire, the spirited call and response tune “Coquette”; “Guilty,” one of Al Bowlly's signature songs, previously included in the soundtrack of popular French film Amélie; and the bolero-mambo classic “Sway,” given a touch of international class and sass via Chloe’s French accent.

“What I love about this period from the 1920s to the ‘40s is that the music is really happy, and it brings people great joy when I sing it,” says the singer. “This is an atmosphere I love to communicate to my audiences. Coeur de Francaise, my first album that I recorded in France before moving to New York, was more romantic and melancholic, based on songs from the 60s through the 90s. Petite Fleur is about love and its sound is decidedly more joyful and upbeat."

“The times we live in are pretty dark,” she adds, “and I like the opportunity to take people away from their problems and help them stay positive, even if just for an hour. People tell me at the end of the show that they feel like they’re in Paris in the 30s. The challenge is to keep those who have seen the show multiple times engaged, so I am always YouTube hopping or buying old vinyls in search of unique jazz standards and French chansons from that era."

Born in the French Alps, Chloe started ballet dancing and playing the violin at a young age. At age ten she moved to Paris where she started acting and singing, and by age thirteen she was already working professionally in the entertainment industry. After a well-received first concert at “Le Reservoir” -- thrown together on a dare, after a bet with famous actor and comedian Mouss Diouf -- she began focusing on music, studying vocal jazz with Sara Lazarus as well as composition and piano with Joe Makholm for three years at the Bill Evans Piano Academy in Paris. During this time, Chloe started to compose her first songs. Furthering her education, Chloe participated in various workshops with prominent French and American musicians.

After years of performing in France and releasing her successful first album, she decided “to follow her dream and dive into the wonderful world of NYC Jazz." "Barely speaking English, I moved to the Big Apple with my artist visa and my microphone. During my time here, I’ve been able to meet and work with wonderful musicians from all around the world including my dream team, which I call my brothers from another mother. After playing all over the city that doesn’t sleep, I created a new band with them called the French Heart Jazz Band.”

Nowadays Chloe performs with these and other musicians in different formats, from duet to septet, in several locations and clubs both in Paris and in NYC -- at the Zinc Bar, The Iridium, Feinstein's/54 Below, Winter Cabaret festival, Summer Cabaret Festival, Vintage Train Swing Festival, Why Not jazz club, Cornelia Street Cafe, Club Bonafide,The Manderley and Gallow Green at The Mc Kittrick Hotel (Home of the famous show Sleep No More), The Top of the Standard, The Plaza, Lotte New York Palace, The Beekman Hotel, the Flatiron Room and Fine & Rare and more. The singer has also performed live on radio and TV shows like “Jazzbox” on Radio Aligre, “La bande Passante” on RFI, Bastille TV, and “Telematin” France 2.

“As a little girl growing up in France,” Chloe says, “I fell in love with music and I was listening to old records of Claude Nougaro, Serge Gainsbourg and the musical for kids ‘Emilie Jolie’ all the time. All these years later, it’s a wonderful pleasure to sing for people and provide a type of musical therapy for others the way my favorite music has always been an uplifting and healing force in my life. Club Bonafide where I have a residency and other clubs has been a wonderful ‘laboratory’ for me and my band to try out new material and develop arrangements and a repertoire that helps lift everybody’s mood. Together, we capture a vintage feeling with a modern twist – and were able to take that into the studio and, with Max Ross’ help, make some real magic!”