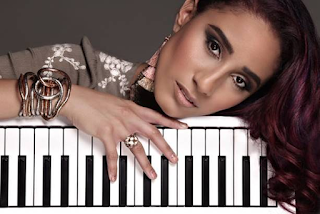 After launching her recording career with back-to-back No. 1 Billboard singles, urban-jazz pianist Kayla Waters is truly a blooming artist on the rise. The third single from her “Coevolve” album is the aptly titled “Full Bloom,” which goes for playlist adds on Monday. The single drops during the period that voters are considering Waters’ music and video for nominations in four categories in first-round voting for the 62nd GRAMMY® Awards.

Under consideration in first-round GRAMMY voting for Jazz Instrumental Album and Engineered Album, Non-Classical, Waters composed the material for “Coevolve” conceptually. To tell the story of a seedling’s evolution into a blossoming plant on “Full Bloom,” she collaborated with Michael Broening. The Washington, DC-based musician-songwriter-producer jetted to Broening’s Phoenix, Arizona studio for the session. The night before meeting with Broening, Waters doodled on a baby grand piano into the wee hours of the night eager to come up with something fresh. The next day, she presented her ideas, which became the essence of the song.

“During that late-night session, I created the chords to what are now the piano verses of ‘Full Bloom.’ I wanted to come up with a unique concept for the song and with Broening’s help, it naturally came to life. When composing, I wanted the musical construct of the song to literally sound like the blossoming of a flower or in the case of ‘Coevolve,’ the evolution of a seed into a beautiful plant. In the song’s intro, you’ll hear me play a glissando upward on the piano to emulate the sound of blossoming,” said Waters, an inspired 28-year-old artist of substance, style and divine depth.

“Full Bloom” is the only song that Waters wrote with a collaborator for “Coevolve” thus the process was different than that of the rest of the record’s creation. With Broening programming the invigorating track, Waters’ ebullient piano is bolstered by guest soloist Nick Colionne’s crisp electric jazz guitar licks. Freddie Fox adds rhythm guitar to the melody and Mel Brown’s bass enhances the brisk groove.

“The embryonic stage of the song was conceived in Phoenix during our first studio session together. From that point, we worked over cyberspace to get the song done. It was actually the longest song to complete for ‘Coevolve,’ likely due to the collaborative efforts, but it’s also significant and symbolic as a plant takes time to grow, to be nurtured and to bloom,” said Waters, who is signed to Trippin ‘N’ Rhythm Records.

When Waters’ sophomore album, “Coevolve,” was released last fall, she scored her second consecutive No. 1 hit when the collection’s premiere single, “Zephyr,” topped the Billboard chart. The accompanying video for “Zephyr” (http://bit.ly/2mzMhp6) is on the first-round GRAMMY ballot in the Music Video category. Also appearing on the first-round GRAMMY ballot for Instrumental Composition is the second single from “Coevolve,” “Obsidian Rain,” on which Waters passionately pours her classically trained piano prowess throughout the ethereal jazz-rock-fusion amalgam that she artfully crafted.

Waters debuted on 2017’s “Apogee,” powered by the defining No. 1 Billboard single, “I Am.” She won the Rising Star in Jazz award from the Black Women in Jazz and the Arts Foundation and was named Best Jazz Artist at DC’s Wammies. For more information, please visit http://www.iamkaylawaters.com.