A timely album by Rainforest Band with a timeless message 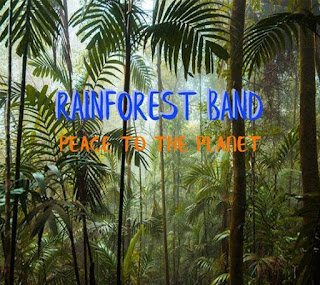 Marking the 30th anniversary of the visionary album that Grateful Dead guitarist Jerry Garcia and keyboardist Merl Saunders recorded to call attention to the destruction of the Amazon rainforest was planned long before “the lungs of the planet” caught fire this past summer. Saunders’ son, bassist Tony Saunders, who toured for a year with his father and Garcia to perform music from “Blues From The Rainforest – A Musical Suite,” continues the vital mission by helming Rainforest Band (https://rainforestband.net), which released “Peace To The Planet” on October 25. Continuing partnerships that began with the original album, a portion of the proceeds from “Peace To The Planet” album sales will go to The Jerry Garcia Foundation and Rainforest Action Network.
While Garcia and Merl Saunders branded “Blues From The Rainforest – A Musical Suite” as “environmental earth music,” “Peace To The Planet,” featuring Tony Saunders, guitarist Vernon “Ice” Black and keyboardist Sylvester Burks, is rooted in contemporary jazz, R&B and gospel music. Joining the trio on the album to spread the message of preservation in the face of the global climate crisis are Billboard chart-topping saxophonist Jeff Ryan, noted keyboardist Gail Jhonson, drummer Austin White and percussionist Maquinto Brasil. Black produced the collection comprised of a dozen songs written by the three band members who are based in the San Francisco Bay Area.

The celebrate the record release and to raise funds for the two nonprofit partners, Rainforest Band will perform at Terrapin Crossroads Grate Room in San Rafael on November 1 with special guests Grammy winner Narada Michael Walden, percussionist Juan Escoveda and saxophonist Angelo Luster along with Johnson and Brasil. Garcia’s wife and daughter, Manasha and Keelin Garcia, who manage The Jerry Garcia Foundation and have collaborated with Tony Saunders on multiple projects over the years, will be present to lend their support.