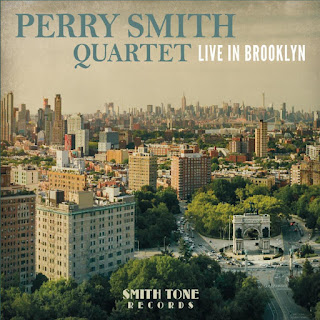 Guitarist, composer, and bandleader Perry Smith thrives in taking part of the building and sustaining of a community; a community of artists connected and united by swing, the blues, improvisation and the long legacy of this music. A vital element for a community of jazz artists is the jam session, as it has, for many years, been the place to meet and fraternize with colleagues and potential collaborators, to check out the "competition," to share, borrow and steal, to play!

Smith, recognizing the need for an all-inclusive, everyone-is-welcome "hang", began his weekly forums, originally called "The Soda Session" at The Soda Bar in Prospect Heights, Brooklyn in 2015, then becoming "The Nest Session," after moving to The Nest in Leffert's Gardens on December 6, 2017.

Smith's new recording, his fourth, Live In Brooklyn, is the culmination of the four years he, and bassist Matt Aronoff, spent cultivating and growing this jam session, and also celebrates the guitarist's 10th year on the NYC scene. "Something that was important to me was booking a diverse collection of artists and being inclusive to women and artists of all backgrounds. It proved to help many of my colleagues feel welcome at our session, and I believe it influenced the booking culture at other sessions and helped promote diversity within the NYC jazz scene," explains Smith. "This model of jam session was not really happening back when I started curating this series, so it's good to see that this inclusive and open model still continues today at the Nest Session, now run by bassist Noah Garabedian. I'm really proud of the work we did. I think it was a great benefit to the overall scene and to my own artistic development. I want this CD to represent that legacy alongside the great playing showcased on this particular night, when I was so fortunate to have Melissa Aldana on tenor, Matt Aronoff on bass and Jay Sawyer on drums."

The Session also served to help others outside of the jazz scene as Smith organized a fundraiser (on 11/29/17) for the non-profit, RAINN.org. The band donated their weekly funding and together with special guests and patrons they raised over $1k in one night for the organization. A testament to the importance and value of these weekly congregations lies in the fact that they became grant funded in August 2016 through KeyedUp.org, a non-profit run by James Polsky who owns the Jazz Standard in NYC.
On Live In Brooklyn Smith leads the Quartet through six tunes, played live, all first takes with an enthusiastic audience along for the ride. The repertoire is split evenly with three Smith originals/contra-facts, "Starlit Skies" (based on "I Hear A Rhapsody," in which one of the lyrics in the song is "Starlit Skies"), "Premonition" (Smith's take on "Milestones," which allows the band to improvise in more of a modal setting around the key of G minor), "Golden Days" (a contra-fact on the standard "Yesterdays," in which one of the lyrics is "Golden Days." "I really love the way it opens with just Aronoff and I playing duo. It's a nice moment that shows some of the great chemistry we created through four years of playing regularly together," says Smith); and three standards, "Don't Worry 'Bout Me" (an old standard that Sinatra made famous. "I love Melissa's cadenza at the end, it's one of my favorite parts of the record," says Smith), "Eternal Triangle" (a barn burner, and Smith elaborates, "I really love Jay Sawyer's drum solo on that track. He shows is unique combination of traditional language alongside modern phrasing, which is the very thing that I love about his playing."), & "All The Things You Are" (played here in a bouncy three feel. Smith comments that, "I really like how it starts with just Melissa Aldana and myself playing the melody. This track is so dynamic, with each solo very musical and interactive . . . it's the proverbial "icing on the cake!")

"A huge inspiration for this project comes from decades of listening to Wes Montgomery's landmark album Full House. That disc was recorded live in Berkeley (in 1962) which is close to where grew up in the SF Bay Area. Over the years I've always come back to it because the energy of the band is so joyful. The interactive playing is incredible and the scope of repertoire includes swinging tracks, straight grooves and beautiful ballads . . . a lifetime of inspiration," states Smith. "Ultimately I'm really proud of the playing on Live In Brooklyn. It's more straight-ahead than my previous recordings and it truly captures the essence and vibe of the session I ran with Aronoff for four years."

In 2018 Smith released his third album as a leader "New Angel" on his own label Smith Tone Records. The project features 10 original compositions for his quintet featuring Jon Irabagon (sax), Glenn Zaleski (piano), Matt Aronoff (bass) and Allan Mednard (drums). The music expands on the traditions of jazz with a fresh approach to modern composing and improvising.

Smith is an active player in the greater New York jazz scene and from 2014-2018 he hosted a weekly series in Brooklyn called "The Nest Session. Every Wednesday for four years he performed with a different group of NYC's finest jazz musicians. The Nest Session was generously supported by a grant from KeyedUp.org, in conjunction with the Jazz Foundation of America. Smith built the session from scratch along with bassist Matt Aronoff starting at a venue named Soda Bar. The session continues today at the Nest as a grant funded series providing opportunities to a wide array of jazz artists in New York City.

In addition to leading his own projects and working as a sideman, Smith is a founding member of the critically acclaimed New West Guitar Group. Based in Los Angeles featuring guitarists John Storie and Will Brahm, NWGG has been performing internationally for over ten years and they are recognized as one of the premier guitar ensembles in the country.

In 2005, Smith received his Bachelor of Music degree from the Flora L. Thornton School of Music at the University of Southern California, where he studied guitar with jazz legend Joe Diorio. In 2011 he completed his Masters in Music at New York University studying with the great John Scofield. Smith was named the "Outstanding Graduate" for 2011 in the NYU Jazz Department.