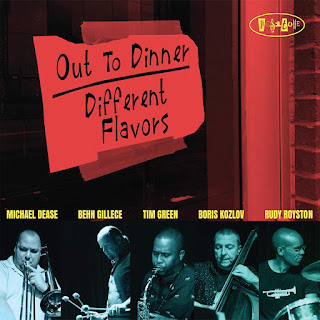 Out To Dinner – Different Flavors

Listeners everywhere are invited to join the fun with the Out To Dinner band and audition a variety of their Different Flavors. Our trusty producer Marc Free continues on an ambitious course of cooking up a visionary series of demand building releases. This latest project features a musical menu of inspired presentations from a curated group with unique instrumentation. It also prompts listeners to expand their sonic palettes to include this adventurous exploration of the jazz genre. This engagingly enjoyable album is a stellar quintet date featuring front line performances from vibraphonist Behn Gillece, trombonist Michael Dease and saxophonist Tim Green moving freely over the solid harmonic foundation of bassist Boris Kozlov and the explosive metrics of drummer Rudy Royston. With the menu full of Different Flavors, we are confident that the collaborative journey of Out To Dinner will bring delight to the ears of every jazz fan and hopefully encourage navigation steadily away from the known and familiar and towards the uncharted depths of modern collective improvisation. 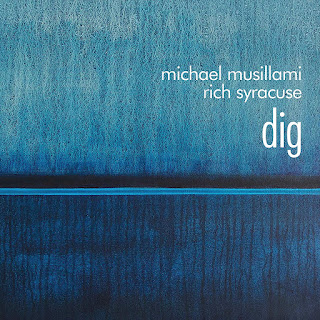 Playscape Recordings is proud to release Dig - music inspired by and dedicated to Bill Evans, a duo recording by veteran guitarist/composer Michael Musillami and master bassist and co-leader Rich Syracuse. This is the duo s third recording, following Of the Night - the music of Wayne Shorter, released in 2016 and Bird Calls - the music of Charles Mingus, released in 2017. After continually adding music composed or inspired by Bill Evans to their live performance repertoire, Musillami and Syracuse felt a strong desire to document an open and expansive vision of Evans often played pieces. The duo, manipulating harmonic content, time and color wanted to put their stamp on the music they had been listening to for 40+ years. In veteran pianist Peter Madsen s liner notes, composed for this release, he writes, For me the artistic expression of inner feelings through music reached a highpoint with the playing of this genius poet of the piano! Bill Evans presence in the jazz world through his improvisations and compositions has strongly affected not only pianists but also musicians on all instruments who strive to follow in his path of beauty, creativity and deep communication. The CD you are now holding is a perfect example demonstrating how his influence has motivated two great musicians of today to honor the great Bill Evans by using his compositions and pieces he has made famous as vehicles for their creative musical explorations! On this CD, brilliant guitarist Michael Musillami and creative double bassist Rich Syracuse dig deep into standards like Blue in Green, Nardis and All Blues as well as some not so famous masterpieces like 12 Tone Tune, Bill's Hit Tune and How My Heart Sings. The CD s second track, Twelve Tone Tune takes the listener on an open-ended avant-romp that tugs on the strings of convention, says Musillami. On Nardis, written by Miles Davis and one of my favorite pieces, we deconstructed the song form to suit the moment with unpredictable results 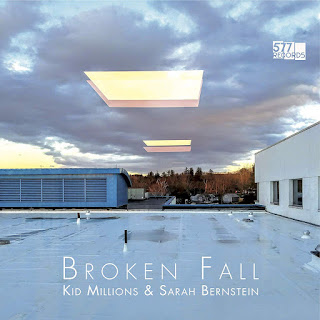 When Kid Millions and Sarah Bernstein conceptualized their new album, they decided to move away from well-trodden improvisational approaches and towards more transcendental, otherworldly sounds. Pulling inspiration from disparate influences such as early liturgical music, Ornette Coleman, Yoko Ono, masters of dub and drummer Milford Graves, they set out to create a cyclical form of spontaneous thematic music. The result is driving and expressive, with pieces of gem-like brevity placed alongside others of sustained evolving intensity. The duo started playing together regularly in 2014. Their early performances were surprising, suggesting new avenues of spontaneous composition. They gradually developed an approach that utilizes an extreme range of dynamics and note density, from pin-drop violin pizzicato and cymbal scraping to powerful electronics, wild vocalizations, and unrelenting drum textures. 'Broken Fall' is their second album with 577 Records. This recording is the first to include Sarah's poetry as lyrics. The text is barely decipherable, intertwined musically with her otherwise wordless vocal expression, yet the rhythm of the words and the meaning drives the temperament of the album. "Broken Fall" is a huge step forward for the duo; an album that fully captures their fluent musical relationship.