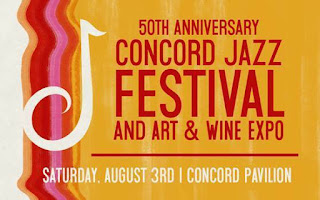 Concord Jazz and Live Nation are proud to present the 50th Anniversary Concord Jazz Festival, to be held on Saturday, August 3rd at the Concord Pavilion in Concord, California. 2019 marks the fiftieth anniversary of the festival, which began at a city park in 1969 and gave birth to the venerable Concord Jazz label. Concord Jazz continues its commitment to presenting the finest jazz and live music with this year’s line-up.

“The Concord Jazz Festival was a cornerstone of the Concord Pavilion concert season for years and we’re thrilled to bring this iconic event back for the 50th Anniversary celebration.” said Aaron Siuda, Senior Vice President of Live Nation Northern California. “In conjunction with Concord Jazz, we’ve put together a stellar lineup that showcases many of the great artists that Concord Jazz represents.”

"The creation of this festival by visionary Carl Jefferson in 1969 led directly to his formation of the Concord Jazz label just a few years later,” said Concord Records President John Burk. “Therefore, we at Concord Jazz owe a great debt to Jefferson and the City of Concord, and we are thrilled to partner with Live Nation in bringing the Festival back home for its 50th Anniversary."

Tickets for the 50th Anniversary Concord Jazz Festival range from $39.50 to $149.50 plus applicable charges, including a limited number of general admission 4 packs while supplies last. Tickets are on sale this Friday, April 19th at 10am and can be purchased online at www.Livenation.com or the Concord Pavilion Box Office.

An exclusive commemorative album of music by the featured artists will be included with every pair of tickets purchased for the 50th Anniversary Concord Jazz Festival.
Grammy-Nominated saxophonist Dave Koz scored the #1 Contemporary Jazz album in the country last year with his latest project Summer Horns II From A To Z. Released June 22nd, 2018 via Concord Records, the album is a stunning showcase of 11 reimagined classics, including “More Today Than Yesterday” from the Spiral Staircase, a medley of Earth, Wind & Fire’s 1976 smash “Getaway” and the KC and the Sunshine Band dance staple “That’s the Way I Like It,” and The Crusaders’ “Keep That Same Old Feeling.” Dave Koz & Friends Summer Horns features Gerald Albright (alto saxophone), Rick Braun (trumpet), R&B star Kenny Lattimore (vocals) and Aubrey Logan (trombone and vocals).

Esperanza Spalding’s “truly intoxicating” (The New York Times) 12 Little Spells will be released on vinyl and CD on May 10th, 2019 via Concord Records. A cutting-edge creator, the four-time Grammy-winning composer/bassist/lyricist released a song a day to her fans last October, which subsequently appeared on a number of Best of 2018 lists, including The New York Times, Rolling Stone and Billboard. The physical version of the album comes with an additional four new songs. 12 Little Spells was first penned by Spalding at a castle in Italy – inspired by the healing properties of art, how music and the body interact, and her interest in Reiki.

In 1976, Chick Corea released My Spanish Heart, one of his most successful recordings. A compositional and intellectual high-water mark, the album combined jazz fusion pieces with more traditional Latin music. On June 28th, 2019, over 50 years later, the 77-year-old keyboard virtuoso revisits this classic project with a long-waited follow-up, Spanish Heart Band – Antidote, featuring with an extraordinary new ensemble and some of his most inspired writing ever. The Chick Corea Spanish Heart Band includes bassist Carlitos Del Puerto and drummer Marcus Gilmore.

Directed by veteran trumpeter Scotty Barnhart, the 18-piece Legendary Count Basie Orchestra includes a peerless array of instrumentalists with combined credentials that have topped the upper echelons of the international jazz world for decades. From Billie Holiday to Bing Crosby, Frank Sinatra to Nat King Cole, Sarah Vaughan to Ella Fitzgerald, the Legendary Count Basie Orchestra has provided the supremely distinctive sound and swing behind some of the greatest singers of the modern age. Coming off a Grammy Nomination for their 2018 album All About that Basie, the iconic big band will perform material from their newest recording Ella 100, a special tribute to Ella Fitzgerald, set for release on August 2nd, 2019 via Concord Jazz.

Performing with the Count Basie Orchestra will be Grammy Award-winning singer Patti Austin, Carmen Bradford, Jamison Ross and special guests. Austin has released more than two dozen albums during her career, and her record Avant Gershwin won the Grammy for Best Jazz Vocal Album in 2008. She is featured on several tracks on the Basie Orchestra’s upcoming Ella Fitzgerald tribute recording, scheduled for release this year on Concord Jazz. Jamison Ross is the winner of the 2012 Thelonious Monk Competition. The multi-talented drummer and vocalist’s debut album Jamison garnered a GRAMMY nomination for Best Jazz Vocal Album, and he was named Rising Star – Male Vocalist in the 2018 Downbeat Critics pole.

Given all the ups and downs the music industry has experienced in the past three decades, it’s remarkable to find anyone who still retains a sense of allegiance or loyalty. Master conguero, band leader and Latin jazz legend Poncho Sanchez is the exception. In 1982, his close friend, multi-instrumentalist jazz icon Cal Tjader recommended he sign with Carl Jefferson’s Concord Records. Tjader told him that Jefferson was looking for new talent and he highly recommended Sanchez. Jefferson gave Poncho a one record deal and the rest is Latin Jazz history. Poncho Sanchez & his Latin Jazz Band, whose next recording is scheduled for release on August 2nd, 2019 via Concord Jazz, celebrate the release of his 27th album and his own 37th anniversary with Concord Jazz, the longest of any artist on the label.
In addition to the main show, this year’s 50th Anniversary Concord Jazz Festival will feature performances of live music emerging jazz artists, an Art & Wine Expo, and an array of vendors on the grounds of the 12,500-seat Concord Pavilion, one of the premier outdoor music venues in Northern California.

Concord Jazz has a rich history since its beginning in 1973. Well established as one of the premier and most active jazz imprints in the world, the label continues its dedication to the art form and its artists, presenting such legendary acts as Chick Corea, Poncho Sanchez, one of the best-selling saxophonists of all time Dave Koz, a special tribute honoring both Basie and Ella, and much, much more to be announced.