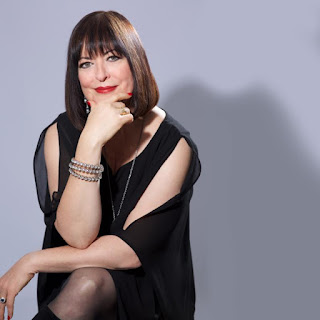 There are precious few vocalists whose artistry flourishes in both the worlds of popular song and jazz, as each world has its own special demands and challenges. Like Sarah Vaughan, Diane Reeves and Mel Torme, Tony-nominated, Theater World Award-winning singer-songwriter Ann Hampton Callaway manages this feat seemingly effortless, delivering vocal tour-de-forces marked by refined beauty, subtlety, grandeur, profound musicality and passion. Having done critically-acclaimed tributes to the likes of Sarah Vaughan and Ella Fitzgerald, written hits for Barbra Streisand, released albums of original songs, and through her performances and recordings helped keep the Great American Songbook alive and vital, Ann decided for her fourteenth album to fulfill a long-time dream-a recording of great songs from classic motion pictures.  On October 19, 2018, Shanachie Entertainment will release Ann Hampton Callaway's JAZZ GOES TO THE MOVIES, a magnificent collection of sublime interpretations of great songs featured in beloved Hollywood films.

"All my life I have been enchanted by the marriage of film and music," notes Callaway, "whether in movie musicals or in the artful use of song to further a story. In the Golden Age of Hollywood, songs written fort these charming films were by some of the most brilliant songwriters of the 20th Century-Irving Berlin, Jerome Kern, Dorothy Fields, George and Ira Gershwin, Harold Arlen, Johnny Mercer, Richard Rodgers, Lorenz Hart and Cole Porter, to name a few. They were celebrating the endurance of dreams and romance and offering hope during a time when the challenges of the Depression and World War II were dampening spirits. During this time of uncertainty, it seemed fitting to revisit this inspiring music."

Callaway does more than "revisit" the wonderful selection of songs on JAZZ GOES TO THE MOVIES; she re-animates them with fresh interpretation and a sensibility informed by our time. Backed by the same intimate group of superb musicians who have backed her during live performances of these songs at the fabled jazz club Birdland: pianist Ted Rosenthal, bassist Martin Wind, drummer Tim Horner and saxophonist Jimmy Greene. They provide the perfect complement to Ann's renditions of such songs as "As Time Goes By" from
CASABLANCA, "The Way You Look Tonight" from SWING TIME, "'Swonderful" from AMERICAN IN PARIS and, originally, FUNNY FACE, and "Blue Skies" from THE JAZZ SINGER. But aside from the inspiration of the songs, Callaway had a more personal motivation in recording them.

"During the creation of this project, I was doing many of the arrangements at the hospital by the side of my mother Shirley, who was in her last days, battling pancreatic cancer," Ann confides. "Since she was the reason I sing and had unerring good taste in music, I'd sing my arrangement ideas to her and she'd nod her head in approval or shake her head as if to say, try again. It made letting her go sweet and a bit poetic since music had always been our great bond."
Ann Hampton Callaway, was born in Chicago. Her father was a journalist and her mother was singer pianist and vocal coach. Her sister Liz Callaway is a singer and actress on Broadway. Callaway is a born entertainer who has made her mark as a singer, pianist, composer, lyricist, arranger, actress, educator, TV host and producer. In high school she performed in musicals and after graduation studied acting at the University of Illinois at Urbana-Champagne before moving to New York City to pursue her dreams. In New York she appeared in clubs as a cabaret singer, forging her signature blend of jazz and pop by performing classic material from the Great American Songbook. While contributing to an album of Cole Porter songs she was invited by the Porter estate to compose music for the songwriting legend's unfinished song "I Gaze In Your Eyes," which was included on her debut album in 1992.  What followed was a dazzling, multi-faceted career that catapulted her to the first rank of interpreters of popular song in America. Aside from recording 17 albums, including critically-acclaimed tributes to Sarah Vaughan and Ella Fitzgerald, she has written songs with Carole King, Rolf Lovland and Barbara Carroll as well writing songs recorded or performed by Barbra Streisand (including "At The Same Time" on Streisand's platinum-selling "Higher Ground" album), Barbara Carroll, Blossom Dearie, Carole King, Patti LuPone and many more. She has performed with top orchestras and big bands in major concert halls in more than 30 countries, collaborating with the likes of Wynton Marsalis and the Lincoln Center Jazz Orchestra, The Boston Pops and more, and performing for President Bill Clinton in Washington, DC and at Mikhail Gorbachev's Youth Peace Summit.

A peerless live performer, her performances are marked by her warmth, spontaneous wit and passionate delivery of standards, jazz classics and originals. As one of America's most gifted improvisers, she frequently takes words and phrases from people in audiences and creates songs on the spot. Ann's dream of working in film, TV and radio has been realized in several recent projects. She made her feature film debut opposite Angelina Jolie and Matt Damon in the Robert De Niro film THE GOOD SHEPHERD, performing the standard "Come Rain or Come Shine". She recorded "Isn't It Romantic?" and "The Nearness of You" in Wane Wong's LAST HOLIDAY, starring Queen Latifah. She recently wrote songs for the upcoming film STATE OF AFFAIRS. She also produced and directed to TV specials called SINGERS SPOTLIGHT WITH ANN HAMPTON CALLAWAY as part of her mission to keep the Great American Songbook alive. All of which makes her new JAZZ GOES TO THE MOVIES album a natural progression.

"My dear friend, producer and greatest champion, Lisa Schiff, is the reason this record exists," Callaway says. "She and I both share the hope that this record will transport listeners to bluer skies and the reassurance of what still matters and will always matter...as time goes by!"