"Shamal Wind", the second album by flautist and saxophonist from Manchester, Chip Wickham 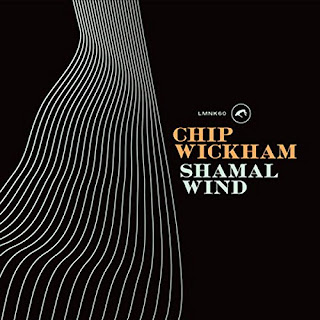 Flautist and saxophonist Chip Wickham started out in the highly influential UK breakbeat, hip-hop and drum & bass scene that was Manchester’s Grand Central Records, working and playing with the likes of Rae & Christian, Fingathing, The Pharcyde, Jimpster, Nightmares On Wax, Jenna G and Graham Massey. It wasn’t long before he found himself touring all over the world, and began working with more mainstream artists like Badly Drawn Boy and Roy Ayers. He also played on the soundtrack to the Guy Ritchie movie “Snatch”.

The following years were spent writing, producing and remixing tracks for a wide range of artists, including his own electro-Latin project Malena, releasing the “Fried Samba” album on Freestyle Records in 2007. However, jazz has always been his first love, and soon he found himself working with award winning UK trumpeter Matthew Halsall, playing live and eventually appearing on Halsall’s critically acclaimed breakthrough album “Sending My Love”. This scene enabled Chip to work with some of the best UK jazz musicians, such as Nat Birchall and Rob Turner, who went on to form Blue Note act Go Go Penguin. This highly influential group of musicians had a long-lasting influence on Chip, which can clearly be heard in his own album.

Always a restless soul and keen to travel, Chip relocated to the late night scene of Madrid in Spain in 2007, and immediately became part of the explosion of the city’s soul-jazz scene. Bringing together his UK and Spanish musician friends led to the formation of The Fire Eaters. While the original idea was to be the backing band for his old friend Eddie Roberts (from UK’s number one funk outfit The New Mastersounds), they eventually became a ‘proper’ band, releasing music on different labels.

Meanwhile, he also released a couple of 45s on the Madrid-based Lovemonk imprint – a mixture of raw funk and heavy Latin beats, which directed him towards the world of soul-jazz and hard funk.

He remained active outside Spain as well, playing and recording with The New Mastersounds, which led to a guest appearance on the Japanese tour following the success of the single “Chocolate Chip”. More big names in the soul scene started calling, and soon he was writing and recording session work for groups such as Lack Of Afro and Deep Street Soul.

This all culminated in an invitation to play for the prestigious Craig Charles Fantasy Funk Band. Based on a poll from Craig Charles’ top rated BBC6 radio show, Chip was chosen to play alongside the cream of the UK funk & soul scene: James Taylor (JTQ), Snowboy, The Haggis Horns (Mark Ronson), John Turrell (Smooth & Turrell), and Mick Talbot (The Style Council).

However, he hadn’t forgotten his jazz roots, and in 2017 he brought together three longterm collaborators from the Spanish jazz scene, Gabri Casanova, David Salvador and Antonio Pax, for the release od “La Sombra”, a spiritual jazz album produced and mixed by Wickham himself. It went on to pick up fans like Gilles Peterson  who included the album in his “Best Album of 2017” list), Lefto, Jon More (Coldcut), Gideon Coe, Chris Phillips (Jazz FM), and many of the UK’s jazz dance fraternity adding gallant praise. Track “Red Planet” was included on volume 12 of the prestigious Brownswood Bubblers series.

A single featuring a remix by Detroit house don Andrés and an edit by Los Angeles’ spiritual jazz and beats scene ambassador Carlos Niño followed, and in the summer of 2017, Chip got the band together again to record the followup album. “Shamal Wind”, as it’s titled, signals a new chapter for Chip, opening up a newfound energy and inclusiveness in his music. Where “La Sombra” saw him taking his first moves toward centre stage (with the title, meaning ‘The Shade’ in Spanish, alluding to him stepping out into the limelight), “Shamal Wind” sees him further expanding on what he achieved in the past year.

His new perspective is partly informed by a recent and serious illness. He was diagnosed with throat cancer in the period before “La Sombra” was released, and wasn’t given any assurances that treatment would be successful. Surviving the experience has given him a new sense of urgency. He had to teach himself to play the saxophone again, and it’s boosted his conviction to achieve his target – to release five albums in five years – which he set himself before his diagnosis. As Chip says himself, “When you’ve got to fight for things, they mean more to you”.
Posted by Jazz Chill at 4:15 PM