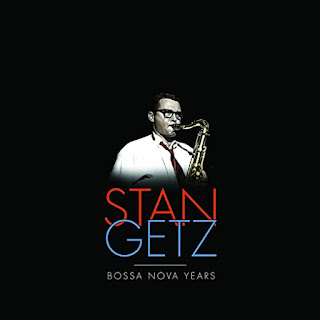 Though born in Philadelphia, Getz was a key architect in the development of the US West Coast "cool school" sound and was heavily influenced by the airy tone of his idol, saxophonist, Lester Young. Getz rose to fame in the late 1940s after serving his musical apprenticeship in the bands of Jack Teagarden, Benny Goodman, and Woody Herman. As a solo artist, his career took off in the 1950s, a time when he earned the nickname "The Sound," which referred to his light, feathery saxophone tone and gift for effortless melodic improvisation.

Bossa Nova Years catches up with Getz's career in the early 1960s, when he was signed to Verve and expanded both his repertoire and audience by marrying cool jazz with an exciting and sensuous new form of music from Brazil called bossa nova. 1962's Jazz Samba LP - recorded in tandem with noted classically-trained acoustic guitarist, Charlie Byrd - was Getz's first foray into bossa nova and helped to popularize the music in America. The album topped the US LP charts, aided by the commercially successful single, the Grammy-winning "Desafinado."

Getz explored Brazilian music in a large ensemble setting on his next album, Big Band Bossa Nova, also released in 1962, which placed his saxophone against a big band backdrop (expertly arranged by Gary McFarland) with spectacular results. Among the standouts are "Manha de Carnival," which is driven by pulsating samba rhythms, and the more reflective "Melancolico."

The Brazilian theme continued on 1963's Jazz Samba Encore! It featured Rio de Janeiro guitarist Luiz Bonfá, and also acclaimed bossa nova songwriter, Antonio Carlos Jobim, who appeared on guitar and piano. Significantly, Jobim was the co-writer of "The Girl From Ipanema," the big hit from Getz's next album, Getz/Gilberto, a collaboration with Brazilian guitarist and singer, Joao Gilberto. Gilberto's then wife, Astrud, supplied delicate, spellbinding vocals on "The Girl From Ipanema," which was released as a single and became a substantial international hit in 1964 (it also won a Grammy). More significantly, it helped to launch Astrud Gilberto's own career as a singer.

The final LP in the Getz package is Stan Getz With Guest Artist Laurindo Almeida, recorded in 1963 but not released by Verve until three years later. It finds Getz hooking up with renowned São Paulo guitarist, Laurindo Almeida, whose delicate but highly rhythmic fretboard work underpins some wonderfully mellifluous horn-blowing by the saxophonist. Highlights include the breezy "Menina Moca" and the gently undulating "Once Again," both spotlighting Getz's burnished lyricism.