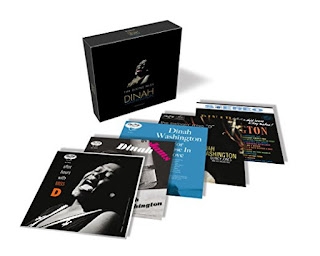 Famed for her clear diction, crisp phrasing, and declamatory delivery, Dinah Washington (1924-1963), like Billie Holiday before her, possessed an immediately recognisable singing voice. A 1993 inductee in to the Rock And Roll Hall Of Fame, Washington was born Ruth Lee Jones in Tuscaloosa, Alabama, and first recorded during the 1940s, serving up risqué blues songs. In the 1950s, Washington - who called herself the "Queen of the Blues" - recorded a clutch of classic albums for the Mercury subsidiary, Emarcy, that revealed her to be a sophisticated song stylist who could sing blues, jazz, and pop with consummate ease.The Divine Miss Dinah box set begins with After Hours With Miss D, a superb 1954 session with legendary horn players, Clark Terry and Eddie "Lockjaw" Davis, in attendance. A finger-clicking "Blue Skies" is one of many standouts. The electrifying Dinah Jams, recorded live in front of a studio audience in 1954, has a looser, improvisational flavor and features bebop trumpet legend Clifford Brown. Mellower and more overtly romantic is 1955's For Those In Love, which contains one of Washington's most popular tunes, "Blue Gardenia," and finds the singer backed by a small ensemble that includes future Miles Davis Kind Of Blue band members, pianist, Wynton Kelly, and drummer, Jimmy Cobb.In sharp contrast, 1957's The Swingin' Miss D, has Washington collaborating with the then rising arranger/conductor Quincy Jones and his orchestra. Packed with effervescent big band uptempo tunes (such as "Caravan") and stylish heart-rending ballads ("You're Crying"), it proves to be an inspired and exquisite pairing of talents that oozes pizzazz.

Two years later in 1959, Washington scored a Top 10 US pop hit and grabbed a Grammy award with her striking remake of the Dorsey Brothers' 1934 smash, "What A Diff'rence A Day Makes," which featured on her album with the same title. What A Diff'rence A Day Makes! also spotlighted future Weather Report co-founder, Joe Zawinul, on piano, and found Washington, augmented by a lush string orchestra, putting her own spin on standards like "Cry Me A River," and "Manhattan."