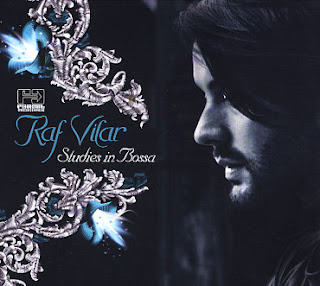 Studies In Bossa is the debut album from Rio-raised, London-based Raf Vilar on the Far Out label. Vilar fits in perfectly with bossa-influenced sounds of Sabrina Malheiros and Clara Moreno. On Studies In Bossa Vilar moves between Portuguese and English vocals through tracks that evoke the great bossa nova, folk and samba of 60s and 70s Brazil whilst incorporating global jazz and electronica. It’s breezy, airy melodies and light arrangements with enough classic bossa craft to stand the test of time! Raf is the nephew of the legendary Ivan Conti, so it's safe to say that he's got this stuff in his blood. The arrangements are mostly laidback, but filled with unfakeable love and passion for easygoing bossa, with some of the best tracks featuring just Raf's vocals and a guitar – but the more arranged numbers with piano, bass, sax and additional percussion are great, too.
Recorded with musician friends in London the relaxed atmosphere allowed Vilar’s beautifully unhurried songs to flourish. Producer and bossa nova enthusiast August Jacobsen, best known as Hunsley & Guz and resident DJ at some of London’s biggest clubs such as Fabric and The Egg, provided the electronic elements especially present in "Solidão," which mixes synthesizers with the accordion. That zestful quirky edge comes out through the album with the sounds of toys, books, keys and coins in the pocket blending perfectly with more traditional instrumentation.
Studies In Bossa draws on many of the singer-songwriter’s influences; as diverse as Jewel and Tom Waits' folk; samba from Noel Rosa; and original bossa nova from João Gilberto and Chico Buarque. Raf’s love of jazz came from his uncle Ivan Conti who is the drummer for Far Out legends' Azymuth, hence his eventual link to the label.
Inspired by a childhood close to the slums of Rio de Janeiro, Raf now lives in a bohemian warehouse in Brick Lane, London. Although in his early 20s the maturity of the song-writing on tracks such as "Então Ve," a pure bossa in which he sings about making the most of life’s opportunities, shines through.
On "Por Um Amor Qualquer," he uses raw samba as a perfect album opener to introduce his sound before taking these studies in bossa through the harmonica-led folk of "So no Ar;" the simple beauty of acoustic guitar and soft vocals on "Perfeito;" and "Amargo Amor," infused with fado from the Portuguese ancestry of Brazil.
With this recording Vilar is unveiled to an international audience. Until now undiscovered, the quality and beauty of these recordings is undoubted: a rare nu-bossa star has arrived.
Tracklist:
1. Por Um Amor Qualquer
2. Bossa Me
3. Sem Ter Voce
4. Imaginar Voce
5. Le Com Cre
6. So no Ar
7. Perfeito
8. Entao Ve
9. Eu Sei
10. Amargo Amor
11. Solidao
12. Lullaby
Posted by Jazz Chill at 1:24 PM