﻿﻿﻿﻿Project Grand Slam (PGS), the contemporary electric jazz group, has released their version of the classic Hollies hit, “He Ain’t Heavy, He’s My Brother”, with Special Guest Vocals by Joye Hennessey. The song is dedicated to the victims of child abuse, relating to the Penn State sexual abuse scandal. Like millions of people across the United States and the world, the members of PGS were horrified to learn of the sexual abuse allegations connected with Jerry Sandusky in the Penn State University football program. PGS was completing its new album when they realized that “He Ain’t Heavy, He’s My Brother” was particularly appropriate to the Penn State scandal. The song’s title was the motto for Father Flannigan’s Boys Town charity, which was created in the early 1900s to help disadvantaged and abused children. The song’s message of support for victims and the abused is consistent with Penn State’s healing efforts following the sexual abuse scandal. Therefore, PGS decided to immediately release “He Ain’t Heavy, He’s My Brother” as a single, and to donate proceeds from the song to benefit the victims of child abuse. ﻿﻿﻿﻿﻿﻿﻿﻿
The song is currently available for download on iTunes at ﻿﻿
http://itunes.apple.com/us/album/he-aint-heavy-hes-my-brother/id482770139. The song will also shortly be available for online streaming from Spotify, Napster, Amazon and others.
﻿
PGS’s debut album, Play, released in 2008, garnered rave critical reviews. A track from the album, “The Captain Of Her Heart”, with guest vocals by Judie Tzuke, was a Top 20 radio hit. In addition, PGS and five tracks from Play were prominently featured in an episode of the hit NBC series, “Lipstick Jungle”, starring Brooke Shields. The core members of PGS are Robert Miller (Electric Bass, Composer), Ron Thaler (Drums, Percussion), and Gilad Ronen (Saxophones, Composer). Each has significant and extensive musical credentials.
﻿﻿Robert Miller plays electric bass and composes. Robert has two albums as leader to his credit: Child's Play (Wildcat Records) and Prisoners of Love (32 Records), both of which received excellent reviews. The former album includes performances by Randy Brecker, Jon Lucien and Anton Fig. His band, The Robert Miller Group, played every major New York area club, graduating to the national festival circuit where they appeared with acts like Bruce Hornsby, Bela Fleck and Kenny Barron. In addition, as co-founder of 32 Records, Robert helped develop this celebrated record label that produced the acclaimed "Jazz For..." series, including "Jazz For A Rainy Afternoon", which dominated the Billboard Jazz Chart.﻿﻿
Ron Thaler plays drums and percussion. Ron is one of the most accomplished professionals in the business, having played on and/or produced more than 75 albums. His impressive credits include work with Al Di Meola, Hiram Bullock, Sarah McLachlan, Alicia Keys, Ashley Simpson, Debbie Gibson, Rob Thomas and Taj Mahal. Ron has also released three solo albums: …Works featuring Ray Anderson, Rufus Reid and Adam Rogers, Grain spotlighting Mike Stern, and Jazzed & Confused: The Led Zep Project including DJ Logic, Dweezil Zappa, and Hendrick Meurkens.
Gilad Ronen plays saxophones and is an accomplished master woodwind multi-instrumentalist and composer. He has recorded for numerous Hollywood films such as Anchorman and Raise Your Voice and the ABC series Eyes. Gilad had worked with some of the greatest living jazz legends of our time, such as Herbie Hancock, Jack De Johnette, Brian Blade, Dianne Reeves, and Kenny Barron to name just a few.
﻿﻿﻿﻿﻿ 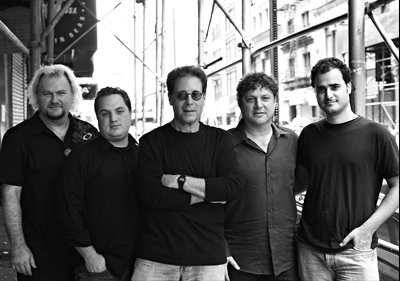