ETTA JAMES NEW ALBUM TO INCLUDE SONGS BY MARVIN GAYE, PRINCE, BOBBY WOMACK & FRANK SINATRA
With a new slimmed-down look, are rejuvenated stage show and celebrating an incredible five decades as a recording artist, music legend Etta James will showcase her enduring artistry on an amazing diversity of the eleven songs featured on her new RCA Victor album, All The Way. Due in stores March 14, 2006 and produced by Etta's sons Donto and Sametto and longtime musical associate Josh Sklair, All The Way includes a range of material that would prove challenging for even the most competent vocalists: "This is an album of songs that I've always loved, tunes that I heard and thought, 'wish I could have been the one to do that one first!'" explains the three-time Grammy winner, who has also been the recipient of a NARAS Lifetime Achievement Award, a Rhythm & Blues Foundation Pioneer Award and is a W.C.Handy Foundation honoree. "For the first time in my fifty-three years of recording, I really had control over an entire album, start to finish. And that feels really good! I got to make an album that I can listen to and say, "I really like this record!'"

During the month of its release, Etta will also be feted by NABOB (The National Association of Black Owned Broadcasters) with the organization's Lifetime Achievement Award at its 22nd Annual Communications Awards Dinner, a staple event held each year in Washington, D.C. Hosted by comedian and radio personality Steve Harvey, the show will be on March 10th and NABOB 2006 honorees will also include Alicia Keys, S. Epatha Merkerson, Maya Angelou, Albertina Walker and Robert L. Johnson with Aretha Franklin providing the evening's entertainment. James, honored with a much-deserved star on The Hollywood Walk Of Fame, adds her special vocal magic to songs originally recorded by Prince ("Purple Rain"), Marvin Gaye ("What's Going On"), Bobby Womack ("Stop On By") and Simply Red ("Holding Back The Years") alongside Leonard Bernstein's "Somewhere" (from 'West Side Story') and "All The Way," the standard most often associated with Frank Sinatra. For good measure, Etta also included R. Kelly's contemporary classic, "I Believe I Can Fly," James Brown's enduring "It's A Man's Man's Man's World" and John Lennon's "Imagine." Rounding out the musical solid set are "Calling You," (from 'Baghdad Cafe') and "Strung Out," a tune originally cut by R&B legend Johnny 'Guitar' Watson, with whom Etta toured during her teen years after being discovered by bandleader Johnny Otis in 1955.

The release of the 1993 Rock & Roll Hall Of Fame inductee's latest project, the follow-up to the 2004 Grammy-winning RCA Victor set Blues To The Bone, comes at a time when Etta is showing off her new look: after losing some 200 pounds in weight, the Los Angeles native grins, "Now I can flaunt my figure wherever I go. I can go shopping and buy those outfits I always wanted to wear!" The loss of weight has also dramatically changed Etta's always-exciting stage performances: "Now I can stand up on the stage again like I used to after five years of sitting down while I sang ... " 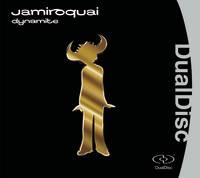 ain, Charmaine Neville and Fats Domino have been added to the lineup of the upcoming New Orleans Jazz & Heritage Festival taking place on April 28-30 and May 5-7…Jamiroquai is performing at the Piazza Castello at the 2006 Olympic Winter Games in Torino, Italy on Feb. 16. In addition, Jamiroquai will be heading to South America in March and April making the following tour stops: March 22 at Club Cuidad de Buenos Aires, Buenos Aires; March 24 at Credicard Arena, San Paolo; March 25 at Claro Hall, Rio de Janeiro; March 27 at Polidro de Caracas, Caracas; March 29 at Rodzio de la Caro, Bogota; and April 1 at Autodromo, La Guasima, San Jose…Javier Limon has produced the self titled debut release of La Neg

ra. The album is a mix of flamenco, jazz, tango and Brazilian music. Nino Josele and