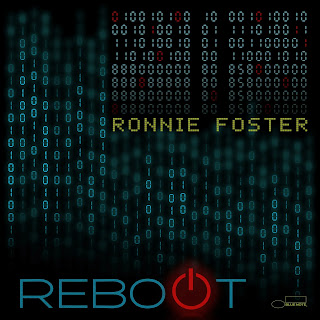 Organ great Ronnie Foster returns to Blue Note Records with the July 15 release of Reboot, his first new album in 36 years which arrives 50 years after his 1972 Blue Note debut Two Headed Freap. The nine-song album was recorded at the legendary Capitol Studios and marks a fresh start for Foster, who has whipped up an omnidirectional brew of Hammond Organ Groove that pays homage to the past but more often reflects his restlessness for ushering in the new. The album’s grooving title track “Reboot” is out now featuring Foster on organ, his son Chris Foster on drums, and Michael O’Neill on guitar. Reboot is available for pre-order now on D2C exclusive red vinyl, black vinyl, CD, and digital download.

Listeners the world over have heard Foster’s soulful playing, whether from his standout performance on “Summer Soft” from Stevie Wonder’s 1976 masterwork Songs In The Key Of Life, best-selling George Benson albums including Breezin’, or A Tribe Called Quest’s classic hip-hop track “Electric Relaxation” which sampled Foster’s “Mystic Brew” from Two Headed Freap, which was reissued last week as part of Blue Note’s Classic Vinyl Reissue Series.

The Buffalo, New York born keyboardist first caught the ear of Blue Note co-founder Francis Wolff when he made his first-ever recording as a sideman on guitar legend Grant Green’s searingly funky Blue Note LP, Alive! in 1970. After Wolff passed away a few months later, Ronnie was officially signed to Blue Note by George Butler making him the next in an illustrious lineage of Hammond B3 organ artisans the label had presented which included Jimmy Smith, Larry Young, and Dr. Lonnie Smith. Two Headed Freap was the first in a run of five stellar jazz-funk albums Foster would make for Blue Note throughout the 1970s including Sweet Revival, Live: Cookin’ with Blue Note at Montreux, On the Avenue, and Cheshire Cat. Stream our playlist Ronnie Foster: The Finest featuring highlights from the organist’s Blue Note discography.

Mightily hoisting the Blue Note organ torch once again, Foster gives thanks to the musical osmosis that was poured into him by all of the greats that preceded him. In the album’s liner notes, Ronnie makes sure to pay homage to one very important person in his life who passed away in 2021: “This album is dedicated to the memory of my brother, friend, Buffalo Homie and hero Dr. Lonnie Smith, who was one of the best in the world on the Hammond B3 organ.”