Peggy Duquesnel | "Piano For My Soul" 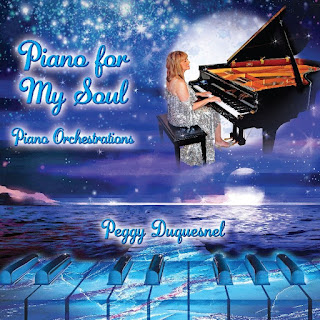 When the volume of the chaotic world becomes too loud as it did at the height of the COVID-19 pandemic, Peggy Duquesnel escapes by sitting quietly at her piano. There, she sets her nimble fingers free to dance gracefully atop the keys, inevitably finding their way into her musical comfort zone. Soothed with soul bared, Duquesnel’s piano emotes a hybrid of classical music and inspirational hymns. These intimate, meditative sessions spawned “Piano for My Soul,” Duquesnel’s sixteenth album, releasing April 8 on her JoySpring Music imprint.

“I recorded a lot of the album during the lockdown and was happy to have the extra time to work in my studio. Many of the arrangements on ‘Piano for My Soul’ were inspired by my classical background. They also incorporate my gift of combining a hymn with a classical theme to create a new and moving piece of music. A light bulb or divine inspiration sometimes comes upon me when I’m practicing, and I get new ideas on bringing two different music pieces together,” said Duquesnel, who produced and arranged the music on the album.

“Piano for My Soul” is presented in two sections clocking in at a generous 71 minutes of music. The first section consists of piano orchestrations with Alan Broadbent, Billy Martin, Andre Mayeux and the late Steve Hall on works composed by Bach, Chopin and Tchaikovsky blended imaginatively with hymns and songs of faith, including several presented as duets between piano and organist Andre Mayeux (“Cristo Redentor,” “Were You There?” and “Precious Lord Take My Hand”), piano and cellist Melissa Hasin (Bach Prelude in C/“The Lord’s Prayer”), and piano duets featuring Hall (“Holy God We Praise Thy Name”/“Sous le dome epais – Delibes” and “You Are My Hiding Place”/“Swan Lake” – Tchaikovsky). The second section is comprised of solo piano numbers.

Duquesnel shares her artistic muse as multisensory experiences. Each selection on “Piano for My Soul” will be accompanied by the release of a nature video created in partnership between Duquesnel and Gary Hanson of CreationScapes. This is Duquesnel’s sixth consecutive album project that includes the release of nature videos crafted with Hanson.

“Since the movie highlighted the life of a jazz musician, I thought it would be fun to see if there was an appropriate song in the movie to add to my album. ‘Cristo Redentor’ was one of the songs the band played in the jazz club in the movie. I had played that standard by Duke Pearson many years ago on jazz club gigs. Being a jazz pianist, it was fun to play and record this standard. I also asked my graphic artist to use the movie’s vibrant look for the album cover artwork,” said Duquesnel.

Duquesnel is an educator, a role that she will carry out through “Piano for My Soul” by releasing piano tutorial videos for several of the album’s selections. She is making her sheet music arrangements from the album available through the JoySpring Music website.

To help launch “Piano for My Soul,” Duquesnel has issued singles monthly along with nature videos since last October when she dropped “Be Still My Soul”/“Finlandia.” She released “Praise God From Whom All Blessings Flow”/Bach 2-part Invention #13 in November; “A Lullaby,” an original composition inspired by the birth of her grandson, in December; and “Take My Life, and Let it Be” last Friday.

Duquesnel will preview the album at a concert that will take place at her church, Good Shepherd Presbyterian Church in Los Alamitos, on March 16.

Based in Long Beach, Calif., Duquesnel’s diverse career spans serving as a pianist, vocalist, composer, arranger, producer, record label owner, and a professor of jazz studies at Concordia University. From recording jazz, pop, inspirational and classical collections to playing at NHL, MLB and Paralympics games, Duquesnel has performed and/or recorded with an array of luminaries such as Broadbent, Dionne Warwick, Henry Mancini, Pat Boone, Jeff Lorber, Jimmy Haslip, Rick Braun, Jeff Hamilton and John Patitucci. Duquesnel is a creative and devout musician who uses her musical ministry as an offering. For more information, please visit www.joyspringmusic.com.