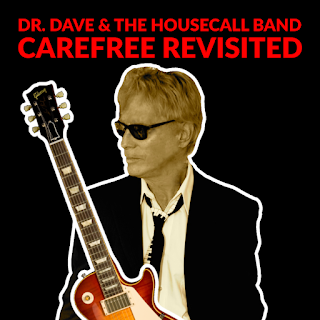 One could debate whether to call it a do-over or a mulligan, but contemporary jazz guitarist Dr. Dave calls it a revisit. The musician took his 2014 album, “Carefree,” and added his HouseCall Band to the tracks to reimagine the collection, which drops March 4 on Hatherill Records.

Dr. Dave felt that “Carefree” was missing something although he couldn’t quite put his finger on what that was until he recorded “Midnight Daydream” as a group project in 2018. Forming The HouseCall Band and adding the gifted ensemble’s unique skillsets and creative contributions to illumine the tracks, eight singles were successfully issued from “Midnight Daydream.”Dr

“For the first time in my career, there was a newness and excitement that paved the way for me to further develop the concept of The HouseCall Band. It dawned on me that it was that dynamic full-band vibe that was missing from ‘Carefree’ – especially that full-bodied horn section energy. By altering the arrangements - some subtly, some more dramatically, we added the vibrant HouseCall Band aesthetic to the mix,” said Dr. Dave, the project’s producer and co-writer of five songs on the album.

Realizing the firepower that he now had on call, Dr. Dave asked the band’s sax and flute player, John Rekevics, to craft fresh horn arrangements for the material that first appeared on “Carefree.”

“John added some amazing flute parts that didn’t exist before, which help further define the songs and enhance my guitar solos. He did an incredible job texturing the tracks with his alto, soprano, baritone and tenor sax,” said Dr. Dave.

There are other noticeable changes and additions. Added to the song list is a version of the Dave Brubeck classic “Take Five,” which on “Carefree Revisited” takes on late-night nuances etched by Dr. Dave’s cool-toned electric jazz guitar and is graced by Derek Cannon’s muted trumpet and sultry vocal embellishments from Stellita Porter and Jackie Bonaparte. Another revision was adding Ignacio “Nacho” Sobres’s vocal improvs and scats to a fun reggae-jazz version of  “Don’t Worry Be Happy.”

Preceding “Carefree Revisited,” radio will be serviced “G.B. Style” as a single, which goes for playlist adds on January 24. Dr. Dave wrote the song with Whitlock and Flournoy in tribute to R&B-jazz crossover legend George Benson whom Dr. Dave cites as a primary influence ever since he heard the icon’s guitar solo on “This Masquerade,” with Benson’s “Breezin’” album serving as a jazz primer for the then young fretman.

Dr. Dave released his debut album, “I Like It Like That,” in 1994, which was produced by Carl Evans Jr. and featured the keyboardist’s band, Fattburger. Evans Jr. mentored Dr. Dave, teaching the guitarist how to produce records. Honing his sound through the years while steadily assembling his own nine-album catalogue as a solo artist and/or band leader, Dr. Dave has recorded with jazz stalwarts Freddie Hubbard, Ernie Watts, Ronnie Laws and Hubert Laws. He’s also opened concerts for Stanley Turrentine, Buddy Guy and Marion Meadows.

According to Dr. Dave, the events of the last couple of years played a role in the timing of “Carefree Revisited.”

“Looking at what’s happened in the world these past two years, perhaps there was a reason I waited to revisit ‘Carefree’ until now. Life is more stressful than ever, and the music on the album is my contribution to alleviating it for a little while for those who listen. Specifically, ‘Carefree Revisited’ is about making music people can enjoy as a way to get away from their troubles – and finally producing it the way it was always meant to be done.”