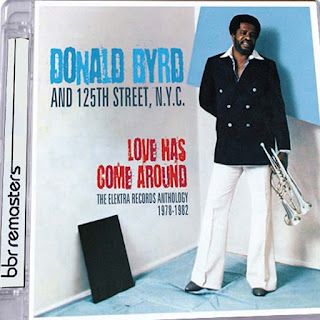 Donald Byrd - Love Has Come Around: The Elektra Records Anthology 1978-1982

Jazz trumpeter Donald Byrd’s critically acclaimed career and life have assured the Detroit native his rightful place as one of the most respected musicians of the 20th century. Having successfully transitioned to Jazz Fusion in the 1970s under the guidance of the Mizell brothers, creating four albums on Blue Note records including the highly influential Places and Spaces, Byrd continued to explore the fertile possibilities of Fusion with four more albums recorded for Elektra Records between 1978 and 1982. 1978s Thank You… For F.U.M.L (Funking Up My Life), 1979s Donald Byrd & 125th Street N.Y.C. , produced by Byrd, and the two Isaac Hayes produced albums Love Byrd and Words, Sounds, Colors and Shapes from 1981 and 1982 respectively are fully represented over a two-disc anthology package from BBR. Tracks produced by Byrd include the up-tempo jazz-funk-disco tracks ‘Thank You For Funking Up My Life,’ ‘Loving You,’ ‘Have You Heard The News,’ ‘Pretty Baby’ and ‘People Suppose To Be Free’ alongside the deeper jazz-fusion cuts of ‘Sunning In Your Loveshine,’ ‘Your Love Is My Ecstasy,’ ‘Gold The Moon, White The Sun’ and ‘Loving You,’ which reached #74 on the Billboard R&B chart early in 1979. The Isaac Hayes produced tracks include ‘Love Has Come Around,’ (Byrd’s biggest R&B hit at #15), the dancefloor work outs ‘Sexy Dancer,’ (R&B #38) ‘Star Trippin’’ and ‘I Love Your Love’. The rich Hayes’ influenced ballads ‘I Feel Like Loving You Today’ and ‘Falling’ sit with the deeper jazz-fusion compositions ‘Butterfly,’ ‘I’ll Always Love You,’ ‘So Much In Love,’ ‘Forbidden Love’ and ‘Everyday.’ Big Break Records is proud to present Donald Byrd & 125th Street N.Y.C, Love Has Come Around: The Elektra Records Anthology 1978-1982. Featuring comprehensive liner notes and rare photos across a sixteen page booklet housed in a super-jewel CD case, Love Has Come Around is an essential addition to any Jazz Fusion, Funk, and Disco fan’s collection. 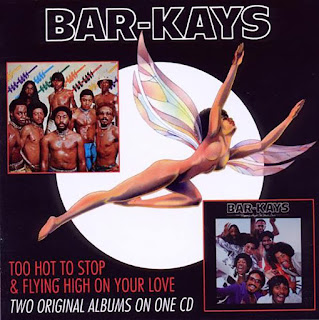 Includes two consecutively released albums marking the second coming of The Bar-Kays in 1976 and 1977. Featuring the Southern Funk classic ‘Too Hot To Stop’, which was closely followed 12 months later by the masterful ‘Flying High On Your Love’. Featuring the band’s first lead vocalist Larry Dodson and his unique vocals plus James Alexander’s cranked to the max bass as the new Bar-Kays sound, with no other pretensions than aiming straight for the dance floor via a series of funk workouts that set the template for many of the groups that followed during the late ‘70s. The original group’s first single ‘Soul Finger’ had become an instant classic and international hit which is still popular today. Stax’s top artist, Otis Redding chose the band to be his regular road musicians a decision that ended in tragedy on December 10th 1967 when Redding, King, Caldwell, Jones and Cunningham all perished when their private plane crashed. Only Ben Cauley survived and James Alexander had not boarded the flight.Despite this tragedy Cauley and Alexander with Allen Jones helped reform the group which culminated in their work with Isaac Hayes on his pioneering 1969 album, ‘Hot Buttered Soul’. 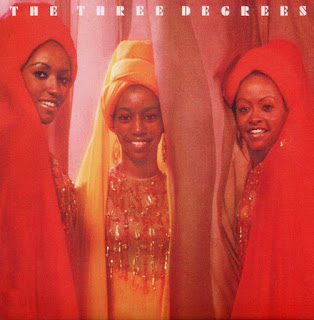 Re-issue of The Three Degrees’ classic Philadelphia International Records’ debut which made quite an impact upon its release in 1974. Honed on the classic Philadelphia sound with MFSB providing the instrumentation, it includes the huge hits ‘When Will I See You Again’ ‘Dirty Ol’ Man’ and ‘Year Of Decision’ plus MFSB featuring The Three Degrees singles cuts and a Tom Moulton Disco remix of ‘Dirty Ol’ Man’. Having been R&B hit makers for years, The Three Degrees were no strangers to the American Soul Chart but the pairing of the group with Philadelphia’s Gamble And Huff took them to an iconic level of appreciation. The Top 20 album spawned the now classic UK #1 ‘When Will I See You Again’ and the top 20 hit ‘Year Of Decision’. Also featured was their Philly debut single ‘Dirty Ol’ Man’ which topped the charts in the Netherlands, staving off the threat of Demis Roussos in the process! Track Listing: Dirty Ol’ Man;Can’t You See What You Are Doing To Me; A Woman Needs A Good Man; 4 When Will I See You Again; I Didn’t Know; I Like Being A Woman; If And When; Year Of Decision; plus bonus tracks: TSOP (The Sound Of Philadelphia) – MSFB Featuring The Three Degrees (Single Version); Love Is The Message – MFSB Featuring The Three Degrees (Single Version); and Dirty Ol’ Man (Tom Moulton Disco Remix). 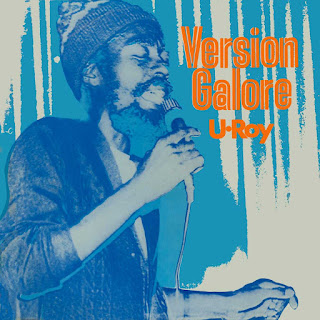 Although largely unreported by the mainstream popular press, 17 February 2021 witnessed the passing of a true great of popular music: Asman Euwart Beckford. Under his stage name of U Roy, Beckford revolutionised the Jamaican music industry and in so doing also heavily influenced the development of hip hop, jungle and grime. In 1970, the immense popularity of his ground-breaking 7” singles for Treasure Isle boss, Duke Reid popularised DJ recordings, and sparked an explosion of similarly-styled discs, performed by a plethora of established and wanna-be toasters. Over the next year or two, U Roy continued to record high quality works for Reid, who gathered many of the DJ’s most popular sides on two best-selling long-players, ‘Version Galore’ and the eponymously titled ‘U Roy’, issued in 1971 and 1993, respectively. In tribute to the man and his music, both of these seminal collections have finally been brought together, along with the remainder of his Treasure Isle singles and a number of rare alternate takes. These historic recordings, which forever changed the sound of reggae, demonstrate the inimitable style that resulted in U Roy becoming the world’s first DJ superstar.