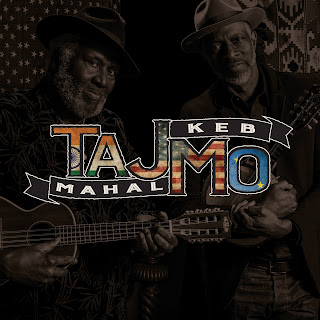 "We wanted to do a real good record together, but we didn't want to do the record that everyone expected us to do," blues legend Taj Mahal says of TajMo, his historic collaboration with fellow true believer Keb' Mo'.  "There wasn't a bunch of cryin' and ringin' hands, we just got together and it came together pretty naturally.  I think it's a pretty upbeat, celebratory record, and it couldn't have come at a better time."

Indeed, TajMo, set for release on May 5, 2017 via Concord Records, marks a once-in-a-lifetime convergence of the talents of two unique American artists who've already built significant individual legacies that have consistently expanded and extended American blues traditions into astonishing new territory.  The collaboration brings out the best in both artists, who merge their distinctive voices, personalities and guitar styles to create vibrant, immediate music that's firmly rooted in tradition yet ruled by a restless, spirited sense of adventure.

The iconoclastic pair's combustible creative chemistry powers such unforgettable new originals as "Don't Leave Me Here," "All Around The World," "That's Who I Am" and the anthemic "Soul." TajMo also features guest appearances by Sheila E., Lizz Wright and Bonnie Raitt, who lends her voice to a memorable cover of John Mayer's "Waiting On The World To Change"; in addition, Joe Walsh adds his trademark guitar work to “Shake Me In Your Arms” and an inspired reading of The Who's classic "Squeeze Box."

"I'm really proud of this record," says Keb', "and I really owe Taj for hanging in there with me.  I feel like this is kind of a legacy project, and we're both pulling from something way back in time.  Taj is a part of the same chain that I've always been pulling on.  He's like a guide through all that stuff, back through the Deep South and the church and the Caribbean and all the way back to Africa.  He has some real musical knowledge that goes back to the origins."

Taj Mahal first made his mark in the late 1960s with a series of visionary country-blues albums that helped to spark a widespread resurgence of interest in traditional acoustic blues.  In the decades since, he has remained a singular creative force, pursuing his free-spirited muse with a lengthy series of eclectic recording projects.  The two-time GRAMMY-winner's prestigious body of work encompasses more than 30 albums, which have explored a wide array of roots music from around the world while remaining firmly rooted in the blues.

Since arriving on the scene in the early 1990s, blues renaissance man and three-time GRAMMY-winner Keb' Mo' has earned a widespread reputation for his mastery of multiple blues styles, and his ability to combine traditional approaches with a contemporary attitude and a timeless storytelling sensibility.  He's released a series of acclaimed albums, as well as appearing in theatre and film projects, and collaborating with a wide array of musicians from various genres.  Like Taj Mahal, Keb' remains a vocal advocate for the preservation of the blues, and has been active in charities that support music education.

Although TajMo marks their first studio collaboration, the two artists have known each other for decades.  Taj has been a longstanding touchstone for Keb' ever since he saw him perform at a high-school student assembly, and Taj even played a role in Keb' winning his first record deal.  The two have occasionally shared stages over the years, but the new album was their first opportunity to create new music together.

"The making of this record spanned two and a half years, working in my home studio whenever we could get together between tours," says Keb'.  "And over that two and a half years, we got to know each other really well.  Making this record was a really, really big deal for me.  Taj is a stellar human being, just a brilliant man, and I learned a lot working with him.  It's an honor to have that kind of person in your life, and there was a lot of trust that developed between us."

"It was a lot of fun," adds Taj.  "We'd been thinking about collaborating for a little while, but once we actually got in there, I was really impressed. Keb's really good at keeping the ball up in the air.  He's a hell of a guitar player, and I'm just amazed at some of the stuff that he put out there."

With TajMo in the can and their first highly anticipated collective tour planned, Taj Mahal and Keb' Mo' are excited about the prospect of getting their new music out into the world.

"It's gonna be big fun," Taj predicts.  "I'm planning on being excited every night and every note.  Some people think that the blues is about being down all the time, but that's not what it is.  It's therapeutic, so you can get up off that down.  You could have 100 consecutive lifetimes, and still only crack the surface of all the music that's on this planet.  It's phenomenal, and it's all connected to the human experience, which is different for all of us but the same for everyone."