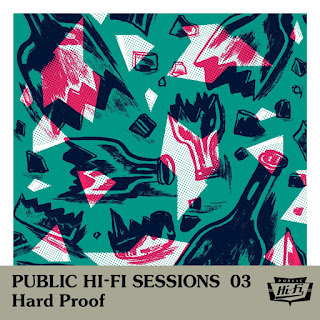 The award-winning 10-piece collective is the finest purveyor of African funk, world music, and jazz inspired by the sub-Saharan African continent in the state of Texas. Formed in 2008, Hard Proof features members of Black Joe Lewis, The Calm Blue Sea, Ocote Soul Sounds, Spanish Gold, The Echocentrics, and several other notable Austin acts.

Public Hi-Fi Sessions 03 is the fourth release from Jim Eno’s (Spoon) record label after three successful vinyl releases from Dupree, Dana Falconberry and Sondre Lerche. This release was recorded in two separate sessions at Eno’s Public Hi-Fi studio in Austin. What makes this release so unique is that the recording sessions were live and 100 percent analog from top to bottom. Stephen Bidwell, the drummer for Hard Proof states, “The first half of the tracks were recorded in December 2015, and Eno was teaching a class from Ohio University, so we had half a dozen ‘interns’ running around learning how to track a large group live to tape. This was sort of a no-pressure situation, but the tracks we got out of it were so solid that we knew we needed to release it. After some talking with Jim, we came back with three more songs in February 2016 and rounded out the record.” Jim Eno expresses: “I first saw Hard Proof at the Continental Club in 2012. It was an amazing show. The 10-piece band had a great feel and magnetic energy. I’d recently recorded the jazz band Dupree live to 1/2-inch tape, and it hit me that Hard Proof would be perfect for this type of project. To record live to tape, the band needs to be incredibly tight because no overdubs are possible, and no mixing occurs after tracking; the tracks are mixed as the band plays in real time. I was confident that Hard Proof could pull this off.”

The six songs on the record each pack their own punch but holistically showcase the band at a new level with its compositions and dynamic live-to-tape performances. The three main composers for the release are Derek Phelps (trumpet), Joe Sokolik (bass), and Joe Woullard (bari sax/flute). Phelps breaks down some of his inspiration and creative process around the songs he composed. He states: “For ‘The Break,’ I was on a break from playing the trumpet due to a busted lip, but that helped me break through my writer’s block, and this tune is one of the first to come out of that.” ‘Popemobile’ was built off a melodic figure created around the beginning of the band, which we played a handful of times, and then I sat on it for many years. When I knew this recording was coming up, I brought it back with a different perspective. It’s one of those simple songs that leaves a lot of room for the group’s interpretation. ‘Institution’ is about the idea of religion and the institutions it creates because I started questioning the religion I was brought up in. Being an instrumental tune, communicating something as complicated as religion is not really possible, but it can be an inspiration.”

Woullard explains his inspiration of compositional songs: “‘Painted Flowers’ is about a grocery store in Texas that sells flowers painted in bright, unnatural colors. Why would you want to paint a flower? Flowers are already beautiful as they are. Some of the prettiest ones are free, growing wild on the side of the road. ‘Revenge’ is a great tune where the ensemble locks into in an aggressive rhythm. Sparse melodies weave between percussive barks and stabs; harmony emerges as lines converge in urgent dialogue. Revenge is a cycle of tension.”

Sokolik rounds out the compositions with ‘Default,’ mentioning that, “The song is a result of an externally imposed deadline where I got to cranking out melodies and overlapping rhythm parts. After running it a few times with the band, we decided it needed to be a lot faster. Then Gerardo came up with the concept for the deceptive introduction, and we ran it in the studio until it worked.”

While Hard Proof’s releases are always well-received, there seems to be universal agreement that the band’s live shows are something not to be missed. KUTX tastemaker Laurie Gallardo put it best. “This local ensemble always puts on an electrifying live show,” she says, “an absolute blowout of nonstop percussion action and blasting brass, bringing the best of both worlds to the stage by mixing classic styles and plenty of their personal panache.” Stay tuned for Hard Proof’s upcoming shows and a new full-length album later in 2016.

Tracklisting:
Side A:
1. The Break
2. Revenge
3. Default
Side B:
4. Painted Flowers
5. Institution
6. Popemobile