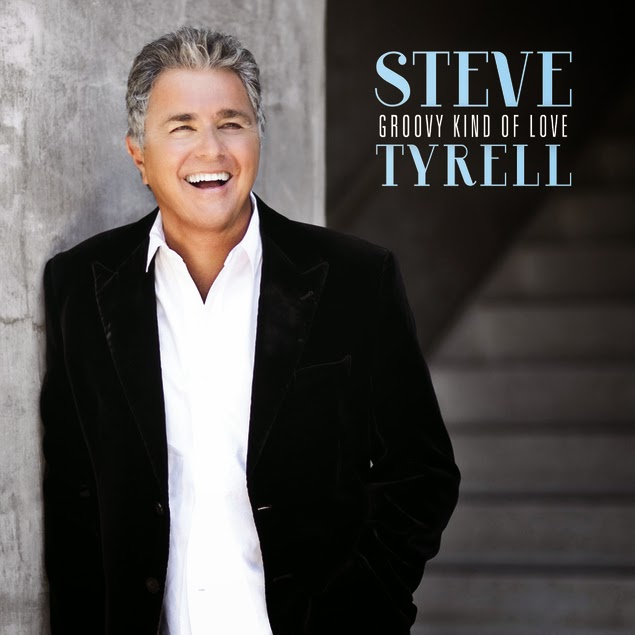 Ever since his glorious surprise version of “The Way You Look Tonight” in the 1991 film “Father of The Bride” paved the way for his extraordinary second career as a GRAMMY Award winning vocalist, Steve Tyrell has been setting A New Standard (the title of his 1999 debut album) for interpreting the Great American Songbook – most notably on Songs of Sinatra (which reached #5 on the Billboard Jazz Albums chart) and his most recent Concord Records release, It’s Magic: The Songs of Sammy Cahn (#2). On his 11th album, Groovy Kind of Love, he celebrates what he calls “the Great American Songbook 2; the next generation of the Songbook,” recording seminal rock era classics penned by legendary songwriters (many renowned for hits penned at New York’s famed Brill Building) who are also cherished longtime friends.

Though the singer has ventured beyond the classic Sinatra era at times to bring his charismatic gravelly charm to projects celebrating the music of Disney and Burt Bacharach, Groovy Kind of Love is a unique, highly personal project. The generous 15-track set is an intimate, decidedly jazzy window into Tyrell’s storied roots in the music business, dating back to the 60’s when the Houston native, still in his late teens, moved to New York and began working in multiple capacities (A&R, promotions man, artist producer) at Florence Greenberg’s Scepter Records.

During that era, Tyrell worked with and/or became close friends with the already established hit-making team of Burt Bacharach and Hal David, as well as upstarts cramped in tight Brill Building spaces whose songs came to define a generation: Carole King/Gerry Goffin, Barry Mann & Cynthia Weil, Jeff Barry and Ellie Greenwich and Neil Sedaka. Greenberg also introduced him to a teenage songwriter named Toni Wine, who would soon pen the Mindbenders hit whose title Tyrell felt was perfect for his collection: “Groovy Kind of Love.” Putting his own natural, charismatic flair on some of their best loved works, Tyrell – who produced the collection with Jon Allen, with stunning arrangements by co-producer Bob Mann - pays homage to all of them in fresh ways, including, on certain tracks, asking them to participate in the recording itself.

The initial concept of Groovy Kind of Love emerged from Mike Stoller’s 80th birthday concert in New York last year. The singer was asked to provide the band and sing, and he was joined by many of the original artists in performing Leiber and Stoller classics to pay tribute to the songwriter. The amazing night of musical celebration was capped by the whole company of the show coming out to join Ben E. King’s performance of “Stand By Me.” Stoller and his wife, musician and vocalist Corky Hale, were invited to join in. “It was a real thrill to sing that song with my childhood idol that night,” says Tyrell.

Tyrell was also inspired to explore this era of his musical life and record this album by the immediate Broadway success of “Beautiful: The Carole King Musical.” He taps into King’s heart-spun magic via the vibrant opening track “Jazzman” (featuring Grammy nominated saxman Dave Koz), an easy-swinging romp through “Up on the Roof” and a dreamy, bluesy rendering of “Will You Love Me Tomorrow.” Reflecting the depth of Leiber and Stoller’s enduring catalog, the singer creates infectious twists on The Drifters’ “There Goes My Baby,” “Hound Dog” (featuring keyboardist Chuck Leavell and some of the original lyrics from the pre-Elvis Big Mama Thornton version) and an intimate reading of “Stand By Me” featuring Stoller himself on Hammond B-3 and a cool new piano chord figure the songwriter introduced on the 2011 Grammy Nominations Concert, when he played the song with Usher.

“Steve’s a good friend and my favorite singer of popular songs, and that goes from rock and roll and R&B to Cole Porter and Gershwin,” says Stoller. “It was a thrill to be asked to play on ‘Stand By Me’ and it was just great fun to listen to him talk about this project and listen to him recording in the studio. This whole project has that sense of fun sprinkled all over it.”

Tyrell’s rich history with Barry Mann includes being the singer/songwriter’s artist manager, producing a solo recording for Scepter and later forming a company that included publishing and music supervising services. Tyrell’s joyful immersion into the Mann & Weil catalog includes the lush Dusty Springfield originated ballad “Just A Little Lovin’” featuring Judith Hill; “Rock & Roll Lullaby,” a poignant story song about a child growing up with a teenage mother, performed as a duet with its original artist B.J. Thomas; “On Broadway” (co-written by Mann & Weil and Leiber and Stoller), performed as a conversational, strutting pop-blues duet with Barry Mann; and “You’ve Lost That Lovin’ Feelin’, ranked by BMI as the most played song of the 20th Century, in soul stirring tandem with Bill Medley of The Righteous Brothers.

“Cynthia and I have known Steve for 50 years and he’s like a brother to me,” says Mann. “With this album, I feel like he’s saying, these are the contemporary standards, the Songbook of a different generation. I particularly love his take on ‘You’ve Lost That Lovin’ Feelin’, doing it half pop, half jazz.”

Jeff Barry comments that he loves the way Tyrell turns “Be My Baby” and “Chapel of Love,” the girl group classics he wrote with his wife Ellie Greenwich and Phil Spector, into pieces that make sense from the perspective of a mature male. “Steve gives them a whole new slant,” he says, “which makes me feel good as a writer. He definitely made them his own.” These infectious gems are also lovely showcases for the vocal talents of his daughter Lauryn Tyrell, who does backgrounds on both. Tyrell rounds out the set with the Burt Bacharach-Bob Hilliard tune “Any Day Now” (whose original version was recorded by Scepter artist Chuck Jackson) and a simmering, horn-fired version of Neil Sedaka’s “Laughter in the Rain” that Sedaka, who duets on the track, emphatically calls “a new jazz standard.”

Tyrell has enjoyed a multi faceted five decade career that has included producing everyone from B.J. Thomas, Rod Stewart, Diana Ross and Bonnie Raitt to Linda Ronstadt, Aaron Neville, James Ingram, Dolly Parton, Chris Botti, Stevie Wonder and Ray Charles; working as a music supervisor for films by Steven Spielberg, Steven Soderbergh, Nancy Meyers and Charles Shyer; penning the #1 pop hit “How Do You Talk To An Angel”; and performing with symphony orchestras all across America. Most of his previous solo albums have gone Top Ten on the Billboard Jazz Albums chart. But as he says in his colorful liner notes to Groovy Kind of Love, “This is the most fun album I have recorded to date…and it’s the closest to the real me.”
“It’s a thrill to work on the arrangement of a song I’ve always loved and suddenly the headphones are on and I’m in the moment, actually singing it,” Tyrell says. “Yes, it’s fun, but it’s also a privilege. I view my career like that of a visual artist who gets to make paintings.

Recording my own albums is always been something I’ve wanted to do, and I would probably keep doing it even if people didn’t think I was any good! When I make an album, it represents a moment in my life and all the things I was thinking about. It was wonderful to work intimately with the songwriters, who I knew could bring fresh insight to me as I recorded their songs. These sessions took me back to a lot of special moments in my life. ‘Rock and Roll Lullaby’ was the last record I made for Florence Greenberg at Scepter. B.J. and I are brothers, friends, we’ve fought wars together…and when I heard his voice come in, it broke me up and I started to cry. I’ve been around a long time, and that never happened before.”

Tyrell will be performing songs from the album when he appears at the Café Carlyle in New York City for a five-week engagement, November 25-December 31.  Joining Tyrell on stage will be musical director Quinn Johnson (piano), David Finck (bass), Bob Mann (guitar), Kevin Winard (drums), David Mann (saxophone) and Jon Allen (keyboards). This will be Tyrell’s tenth year performing in the revered holiday season slot, after taking over for the legendary Bobby Short in 2005.