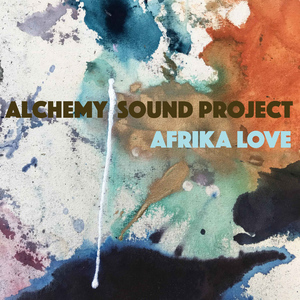 Alchemy is defined as "a seemingly magical process of transformation, creation, or combination"(Oxford English Dictionary). It's hard to imagine a word that more aptly suits Alchemy Sound Project, a collective in which five esteemed composers and bandleaders - pianist Sumi Tonooka, woodwind players Salim Washington and Erica Lindsay, trumpeter Samantha Boshnack, and bassist David Arend - form a potent ensemble greater than the sum of its parts. A synergy that seems almost supernatural, especially given the far-flung home bases from which these artists converge, is evident throughout Afrika Love, the band's third album, via Artists Recording Collective.

Alchemy Sound Project formed in 2014, two years after the group's members met in Los Angeles at the Jazz Composers Orchestra Institute, where, over the course of a week, they learned to utilize Western classical music concepts and orchestration techniques. "We were five friends and colleagues who had all these similar connections," Tonooka recalls, "and I wanted us to be able to extend what we do together musically, instead of leaning on other projects or other commissions - to set up our own small chamber group to play and record. "What resulted is a diverse, eclectic group that makes powerful, original music meant to blur the boundaries between notated composition and improvisation.

Sessions for Afrika Love took place in January 2018 in Conshohocken, PA. But the album's title, borrowed from the composition that Washington contributed to the album, reflects the band's keen awareness that this recording arrives in the wake of one of the most tumultuous years in recent U.S. history - a pivotal period in which race relations and social justice protests have taken centerstage.

According to Tonooka, the band found the title" appropriate in terms of what's happened with the BlackLivesMatter movement, and with what the country still has to deal with in terms of conversations about racism and he aftermath of slavery, and the fact that we still haven't gotten it together to really heal, because no one seems to talk about it in a way that is healing." Seen in that light, the multi-gendered, multi-racial makeup o Alchemy Sound Project in itself offers an understated, buoyantly positive example of cooperation and mutual regard.