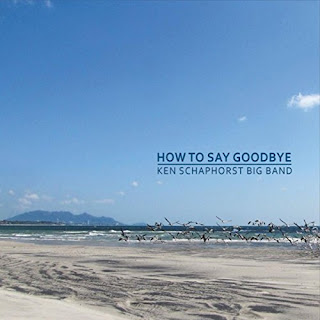 Composer and bandleader Ken Schaphorst, chair of the Jazz Studies Department at New England Conservatory since 2001, pays tribute to some of his most profound influences on his fourth big band release, How To Say Goodbye. The deeply moving and wide-ranging album includes homages written in honor of jazz and education visionaries Bob Brookmeyer and Herb Pomeroy, both of whom went from mentors to NEC colleagues during Schaphorst's tenure at the Conservatory. Those compositions join an emotional ode to another formative influence, Schaphorst's late grandmother, in a richly diverse set that draws on influences from Ellington and Gerry Mulligan to African mbira music.

How To Say Goodbye, due out December 2 on JCA Recordings, features an all-star lineup, many of whom can trace their relationships with Schaphorst back to his earliest large ensemble efforts 30 years ago. Veterans of the composer's True Colors Big Band like tenor saxophonist Donny McCaslin, trumpeter John Carlson, trombonist Curtis Hasselbring and percussionist Jerry Leake sit alongside rising stars like saxophonists Brian Landrus, Jeremy Udden and Michael Thomas who studied with Schaphorst at NEC and played some of these pieces in student ensembles during that time.

The ensemble is also studded with current and past colleagues from the NEC faculty, including McCaslin, Leake, trombonist Luis Bonilla, guitarist Brad Shepik and trumpeter Ralph Alessi, as well as alumni including Hasselbring, trumpeter Tony Kadleck and bass trombonist Jennifer Wharton. More than just a source for collaborators, Schaphorst says that his time at New England Conservatory has played a fundamental role in shaping his compositional voice. "These pieces have been profoundly influenced by my interactions withŠ many tremendously talented students," he writes in the liner notes.

Of course, Schaphorst's music can't help but be impacted by the many long-lasting musical relationships represented on the album, many of which date back decades. "I've worked with almost every member of this band many, many times," he explains, "and all that history is imprinted on me. I've learned so much over the years from hearing these guys, and I think they've been influenced by hearing and playing my music. As I get older I realize how important and irreplaceable that is."

The results of such deeply-rooted and intimate knowledge is evident from the outset of How To Say Goodbye, which opens with the title track that Schaphorst wrote to feature trumpeter John Carlson. The composer describes the piece's constant changes and shifts as tracing an autobiographical tale, with fellow trumpeter Carlson playing a surrogate narrator. The varying tempos and moods play out as the up-and-down chapters of a relationship, and while the title becomes more sentimental over the course of a full album containing loving farewells to lost loved ones, in this case the abrupt and somewhat discordant finale suggests another, less polite way of saying goodbye. "It's not a happy ending," Schaphorst says with a laugh.

The lush Ellingtonia of "Blues for Herb" was penned in tribute to influential trumpeter and educator Herb Pomeroy. Schaphorst first encountered Pomeroy in a summer jazz studies program in 1979, beginning a musical relationship that would last for the remainder of Pomeroy's life. "I was blown away by him on a human level," Schaphorst recalls. "He was an amazing educator and a very musical, sincere, lyrical player. I learned so much from him, and he was always very supportive of me and my music." During his final years, Pomeroy coached jazz ensembles at NEC at Schaphorst's request. "Blues for Herb" is a showcase for the boundless tenor playing of Donny McCaslin, whose talents have been crucial to music by everyone from Maria Schneider to David Bowie. McCaslin was also a student of Pomeroy's, a personal connection that shines through in his jaw-dropping, virtuosic solo.

The folksy shuffle of "Take Back the Country" is Schaphorst's homage to legendary trombonist/arranger Bob Brookmeyer, whom Schaphorst came to know quite well through their work together at NEC until Brookmeyer's passing in 2011. If the rhetoric of the title sounds over-familiar in this presidential election year, that's no accident - it's the composer's acknowledgement of Brookmeyer's outspoken political views, which found him actually buying property in Canada following the 2000 election (though he never ultimately made the threatened move). The folk-jazz inflections reflect music that Brookmeyer made with both Gerry Mulligan and Jimmy Giuffre.

The swaying rhythm of "Amnesia" is inspired by Argentinean tango master Astor Piazzolla, but more importantly serves to memorialize Schaphorst's grandmother, who passed away in 2000 at the age of 90. Her memory was fading, the composer recalls, but she still loved to dance. A similar, if less mournful mood is summoned by "Float," a ballad whose name is self-explanatory as soon as one hears Matt Wilson's weightless rhythms and the soaring horn lines.

Schaphorst essays a solo Rhodes intro to the first of two "Mbira" pieces on the album, both influenced by the characteristic rhythms of the African thumb piano. Integral to both is the percussion mastery of Jerry Leake, a colleague at NEC throughout Schaphorst's tenure and a crucial influence on the composer's integration of West African and Indian traditions into his music. Leake's tabla playing also adds an intoxicating texture to the album's closing tune, "Descent," offering an exotic atmosphere for Ralph Alessi's bold trumpet solo to explore.

The gentle swing of "Green City" is a cheerful celebration of Boston, the city that Schaphorst has called home for much of his life - first through most of the 1980s and then, following a decade-long stint at Lawrence University in Wisconsin, since 2001 and his assumption of the Jazz Studies chair at NEC. Finally, the impressionistic "Global Sweat" is meant less as a comment on global warming, though Schaphorst has no problem with that interpretation, than as a vivid sonic depiction of a swelling storm, which finally breaks into a torrential group improvisation.

With ten vivid, memorable pieces and an abundance of outstanding musicianship, How To Say Goodbye ends by suggesting one more way - leave 'em wanting more, and keep the door wide open for those we'll be happy to see again.