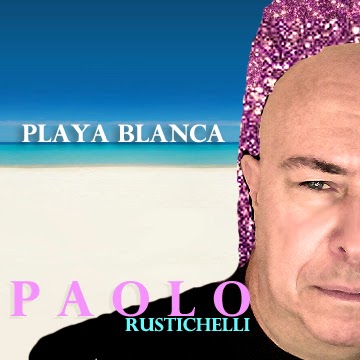 Paolo Rustichelli is a composer, piano & keyboard virtuoso, singer and producer that realizes his productions completely by himself. He is a real 'One Man Band' that impresses audiences with his eclectic styles that make him really unique. His sound has become a trademark and source of trends and inspiration among artists worldwide. Among his album projects, Paolo recorded, performed and produced for rock-jazz superstars like Carlos Santana and Miles Davis.

Son of the Italian three-time Oscar nominee, Carlo Rustichelli, Paolo started his career at age 16 simultaneously as a soundtrack composer and as a rock keyboard player with the album "Opera Prima"on RCA Records, considered by several critics a Rock Progressive masterpiece.

As a teenage prodigy, Paolo pioneered the use of the mono synth ARP 2600 and Moog in Albums and Movies, including the Italian cult film Fernando Di Leo's "Razza Violenta". This score was entirely made with both the Yamaha CS80 polysynth and with the first sampler machine of the world, the Fairlight CMI, making Paolo one of the first composers to make a soundtrack entirely with synths. Among movie aficionados, Quentin Tarantino is a fan of Paolo's music and Fernando Di Leo movies.

In 1991 Paolo moved from Rome to Los Angeles. In 1995 he released the solo album "Mystic Jazz" (called "Capri" in the US, by PolyGram records) which was the first European jazz-rock album released worldwide by PolyGram records. Paolo achieved further success creating the "Chill Out music" genre with albums 'Mystic Jazz' and 'Mystic Man', which proved to be extremely influential for smooth jazz progressive style.

In 1997 he released the album "Mystic Man" in the US through Island Records, which featured the legendary Miles Davis, Carlos Santana, Herbie Hancock, Wayne Shorter, Andy Summers and the disco diva Jill Jones. In that same year, Gavin and Radio & Records (Billboard) reported the song "Paisa" from Paolo's album "Mystic Man" had reached BILLBOARD N.1 the Top 10 on the U.S. NAC chart ( Smooth Jazz ).

In 2002 Paolo composed, arranged and produced the song "Kyrie" for Placido Domingo's Sacred Songs album for 250 elements orchestra. The album "Neopagan", completely made with state-of-the-art plug-in technology, charted in the US Radio charts in 2006 with the song "My Geisha". The single "Soul Italiano" (2011) was at the Top Ten radio charts for seven weeks. In 2014 the single "Med Groove" went N.1 in the Smooth Jazz Charts becoming a Smooth Jazz Hit. "Med Groove" was also N.1 at Amazon Top Sellers for 2 months.

As a film score composer he has scored more than 100 movies for theatrical and TV releases, including Top Box Office success like 'Amici Miei - Atto III' by Mario Monicelli & more. Paolo's videos, like his music, are usually shot by himself. In this way Paolo preceded the 'selfie' current trend. The video of the songs: "Soul Italiano" (2011), "Med Groove" (2014) and the recent "Playa Blanca" are examples.

Paolo is currently working on his Album "Soul Italiano" which is scheduled to be released at the end of 2014. He can be contacted at store@mp3tracks.com.