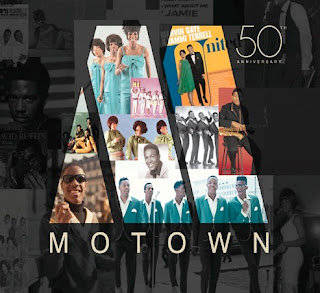 New (and just in time for the holidays) is the 10-CD box set Motown: The Complete No. 1's (Motown/UMe) which brings together every Motown No. 1 hit, from every U.S. and international chart and from every genre - a staggering 192 tracks-plus 10 bonus tracks whose cover versions were No. 1, for a total of 202 No. 1 recordings. Housed in a replica of the original Motown headquarters, Hitsville U.S.A., Motown: The Complete No. 1's spans generations of musical memories, beginning with 1961's R&B No. 1 "Shop Around" from The Miracles, and the label's first Pop No. 1, "Please Mr. Postman" from The Marvelettes. From The Supremes' five consecutive No. 1's, starting with "Where Did Our Love Go," to The Temptations' immortal "My Girl," this is the soundtrack to the sixties, seventies and beyond, concluding with 2000's "Bag Lady" from Erykah Badu. Heard too are Stevie Wonder, Marvin Gaye, Four Tops, Martha & the Vandellas, Gladys Knight & the Pips, Jackson 5, Diana Ross, Michael Jackson, Commodores, Rick James, Lionel Richie, Boyz II Men, and more.

Motown Records changed the sound of popular music and also its face. With Motown artists appearing on television's music and variety shows, the label put African-Americans in the spotlight like no other music company ever had. In this 50th anniversary year of Motown's founding, Motown 50 - The DVD (Motown/UMe), to be released November 3, 2009, presents 18 classic and often rare television performances from 1965 through 1971 featuring some of the label's greatest artists performing their biggest hits. Some of the DVD's highlights include the Marvelettes on Teen Town with Motown's first Pop #1 hit "Please Mr. Postman"; a luminous live "The Tears Of A Clown" by Smokey Robinson & the Miracles on The Andy Williams Show; The Supremes with a hardly seen "Back In My Arms Again" on The Mike Douglas Show; and Martha & the Vandellas performing "Dancing In The Street" on The Ed Sullivan Show and "Nowhere To Run" while on the Ford Mustang assembly line for a Murray The K TV special, a famed clip where they show deft footwork while avoiding workers continuing to build cars.

Motown: The DVD includes highlights from national Hollywood-based shows - such as Hullabaloo, from which the DVD shows the Marvelettes singing their 1966 hit "Don't Mess With Bill" and Hollywood A-Go-Go, featuring a young Marvin Gaye doing the "Hitch Hike" - to local and syndicated series. From Los Angeles' Shivaree is Brenda Holloway's "Every Little Bit Hurts"; from Philadelphia's Hy Lit Show is a rare color clip of the Contours grinding to "Do You Love Me"; from Cleveland's Upbeat are David Ruffin's "My Whole World Ended (The Moment You Left Me)" and Edwin Starr's "War"; and from Motown's own Detroit come Swingin' Time with Kim Weston's "Take Me In Your Arms (Rock Me A Little While)" and Stevie Wonder's "Uptight (Everything's Alright)" and the short-lived Teen Town with the Temptations' "My Girl."

Gaye is also heard on the Live From The Bitter End series from New York City with a suave version of "Ain't That Peculiar." Gladys Knight & the Pips lay down an electric "I Heard It Through The Grapevine" for the 1972 Save The Children Concert from Chicago. Two performances hail from across the Atlantic: the Four Tops with an exciting "I Can't Help Myself (Sugar Pie, Honey Bunch)" on the Belgian show Tienerklanken and Jimmy Ruffin with "What Becomes Of The Brokenhearted" for the German TV series Beat Club.

To enhance the experience, Motown 50 - The DVD allows the listener to choose the audio: original broadcast audio and, where available, original single mono mix, remastered stereo or 5.1 Surround. Additional features include vintage interviews with Motown founder Berry Gordy, the Four Tops, Smokey Robinson, Gladys Knight & the Pips and others, interspersed between clips; plus bonus material that includes the full interview segment from a Teen Town special with Berry Gordy and Motown's head of sales, Barney Ales; personal, never-before-released footage from a seventies Motown picnic; and an entertaining retrospective of news, entertainment and advertisements from 1959, the year Motown was launched.

The celebration of Motown 50 continues around the globe with events, special programming, exhibits, etc. An irresistible force of social and cultural change, Berry Gordy's legendary Motown Records made its mark not just on the music industry but society at large, with a sound that has become one of the most significant musical accomplishments and stunning success stories of the 20th century. No other record company in history has exerted such an enormous influence on both the style and substance of popular music and culture. That influence is still being felt today, from pop to hip-hop, as Motown celebrates the 50th anniversary of the company's founding. Today, Motown is part of the Universal Music Group, with its classic recorded music catalog managed by Universal Music Enterprises (UMe).

http://www.classic.motown.com/
Posted by Jazz Chill at 7:00 AM