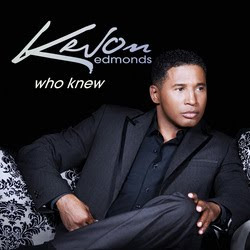 Singer Kevon Edmonds is making a dramatic return to recording after nearly a decade of absence with the dreamy "Oh," the 1st single that is quickly moving up the charts towards Top 10 on Billboard's Hot Adult R & B Airplay Chart and on Hot R&B/Hip Hop Singles Chart from his Make Entertainment CD, Who Knew (distributed by EMI). Produced by Greg Curtis, the song howcases Edmonds' yearning high tenor in a manner that will have ladies swooning all over again. The beloved song stylist is set to appear and perform on The MoNique Show (check local listings for announcement of guests) and the revamped Soul Train Awards, airing Sunday, November 29th at 9:00 p.m. on BET's new network, CENTRIC (formerly BETJ).

"Oh" speaks to relationships," Edmonds shares, "It's about reconnecting with that person that you're involved with and moving forward in a positive way. People today aren't as grounded as they used to be... They don't go into the union of marriage cognizant of what is truly required. Too often we allow little things to put a wedge between us. I've lived long enough to see people I've known who divorced then look back with regret realizing they didn't stick together long enough to make things work. This speaks to people about fighting for a good thing through the rough patch. If you're fortunate enough to have love in your life, you've got to recognize it and work to hold on to it." As with most songs Edmonds sings, he took into careful consideration the impact that the song would have when he performed it before an audience. "There's an intro I do live that speaks to the importance of how I just described the song," he continues. "I was thinking about the way Rick James opened 'Fire and Desire,' but my way. When I get through, you're ready for somebody to drop some serious love music on you." Kevon has been doing just that throughout his distinguished career.

With two decades of faithful, soulful service under his belt, Kevon Edmonds is among R&B/Pop music's most adored vocalists and songwriters. As the founder and lead singer of vocal trio After 7, Kevon serenaded lovers around the globe with such hits as "Ready or Not" and "Can't Stop" (both reaching #1 on Billboard's Hot 100 R&B Chart and attaining Top 10 status on Billboard's Pop singles Chart). His voice remains a favorite among fans of movie and television thanks to After 7's hits "Nights Like This" (from The Five Heartbeats movie), "Gonna Love You Right" (from Sugar Hill) and the Adult Contemporary smash "Not Enough Hours in the Night" (from the Beverly Hills 90210 television soundtrack). With After 7, Kevon scored a multi-platinum selling debut album, two Gold albums, three Gold singles, seven Top Ten radio singles and three Gold soundtracks. Kevon then co-executive produced his solo debut, 24/7 alongside his brother, pop music icon Kenneth "Babyface" Edmonds. The title track of the 1999 release, "24/7," rose to #2 at R&B radio, crossed over to Pop, and sent the 24/7 CD to Gold status.

Now living in Nashville, the Indianapolis-born vocalist completed a soulful new project with the help of hot producers/songwriters Greg Curtis, Kadis & Sean, Kevin Randolph, Damon Thomas and Jayshaw Champion, his talented nephews Jason Edmonds and Dave Edmonds, along with Aaron Pettigrew and Karl Antoine. Edmonds explains, "I wanted to create a body of work that will take listeners on a musical journey - bridging the gap between the R&B of old and R&B of today. I had my ear on a couple of young producers, but I was not using them to pursue a 'youthful' sound. My goal is to open the ears of today's young R&B listeners so they can hear where the music they listen to really comes from. I simply want to bring back the magic of love and romance." To illustrate his point, Edmonds refers to a remake of "Never Let You down" that he recently recorded for the project Silky Soul Music…An All-Star Tribute to Maze featuring Frankie Beverly. "I recently performed that song at a show in Rozelle, New Jersey," Edmonds shares. "I spoke to the crowd about the importance of paying tribute not to just our fallen soldiers but those still with us. Frankie Beverly is one of those. His band Maze is the Black equivalent of the Grateful Dead in the way they bring out faithful fans every time they do a concert - whether they have a new album out or not! He's impacted the fabric of our culture for a stretch of time."

http://www.youtube.com/watch?v=WcL2ONdq4wY
Posted by Jazz Chill at 7:00 AM