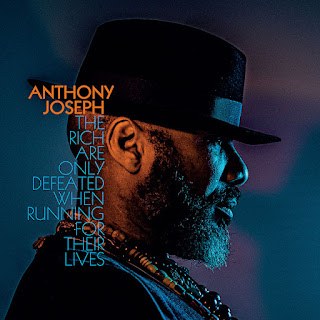 British-Trinidadian poet,musician, and author Anthony Joseph’s latest album contains multitudes. Operating as a dedication to poetic ancestors and a coming together of musical generations, ‘The Rich are Only Defeated When Running for their Lives’ is also an almighty jam. Recorded live last August, it shows off the prowess of a team of master musicians (Shabaka Hutchings among others) from Paris and London. Jason Yarde, who also produced Joseph’s 2018 album is credited as producer, composer, and arranger – to startling, albeit intimate, effect.

Running throughout the release are inter-connected themes: memory, place, belonging and acts of homage. Opener, ‘Kamau’ pays respect to the lauded Barbadian poet, Kamau Brathwaite who passed away in February 2020. Brathwaite was an important influence on Joseph – the two writers met several times. On ‘Kamau’ Joseph compellingly conveys not only the nature of Brathwaite’s aesthetic, but the full potential of a Black surrealist poetics, in an urgent, clipped diction against a rousing musical soundtrack which features Hutchings on bass clarinet.

When asked to convey the essence of Brathwaite’s “energy” in a 2018 interview, Joseph used the words “audacious … muscular,” while also noting the late poet’s capacity to “give voice to the voiceless.” A similar description might be used for Joseph’s new album, in its evocation of the post Windrush generation’s search for belonging  — a story that soon becomes Joseph’s own (‘Calling England Home’), in the recounting of familial grief (‘The Gift’) and in the expansive grooves and storytelling on ‘Maka Dimweh’, a poem/song that universalises the tale of a Guyanese soldier.

One of the album’s most striking cuts, ‘Language (Poem for Anthony McNeill)’ once more memorialises another key figure in the Caribbean literary landscape: McNeill, a Jamaican poet known for his radical modernist aesthetic, deeply influenced by jazz, who died before his time in 1996. The 10-minute plus groove shows the band to full effect, as Joseph compellingly conjures something of McNeill’s gift and the potential of “language rooted in the drums…the cry of the horn.”

In fact, the entire album might be understood as part of Joseph’s engagement with his Caribbean musical and literary roots; the somewhat mysterious album title, for instance, comes from the Trinidadian writer, philosopher, historian and socialist activist, C.L.R James’ book on the Haitian revolution, ‘The Black Jacobins’ (1938).

To Yarde and Joseph’s credit the musicianship never falters, even when conjuring deeply contrasting moods. See, for instance, the foregrounding of a formidable horn section of top-level saxophonists of very different aesthetic stripes (Hutchings, Yarde, Colin Webster – a longstanding Joseph collaborator and Denys Baptiste, whose credits include McCoy Tyner and Billy Higgins).  ‘Calling England Home’, for example, is carried along by a sleepily evocative ‘60s horn-driven dancehall ambience, entirely in keeping with the song’s lyrical focus.