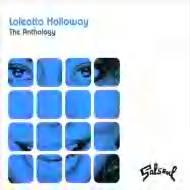 Lots of rare stuff being released lately and we thought we would pass onthe information to you in case you happened to be looking for it. Here is a sampling of what we have come across.

Loleatta Holloway – Loleatta Holloway: The Anthology
Finally a greatest hits collection from Loleatta Holloway that actually includes all of the her other work besides her disco releases. Her former label, Salsoul, has accumulated the mellow and soulful tracks that she had recorded during her disco heyday to complete the collection of rarities. This double CD collection includes 33 killer tracks in all. Drop it onto your CD player and enjoy!

Sonio Rosa – Bossa Rosa De Sonia
Originally released in the 60’s, Sonia Rosa sings and plays guitar against a sweet bossa background. The tracks are smooth, jazzy and breezy – and yet still current enough to include as part of your Brazilian collection.

Bohannon – Footstompin’ Music – The Best of Bohannon
Probably one of the most underrated musician/producers of his time, Hamilton Bohannon is long overdue for the recognition that he so deserves.This collection includes his early work for the Brunswick record label andit includes some great trimmed down funk sounds dating back to the early 70’s.

Joe Bataan – Subway Joe / Gypsy Woman
A superb collection by Joe Bataan, who was able to successfully merge thesound of 60’s soul alongside New York Latin influences. We are glad to seethat there have been a batch of Joe Bataan rereleases lately and this oneis definitely one of the best out there..
Posted by Jazz Chill at 7:13 PM