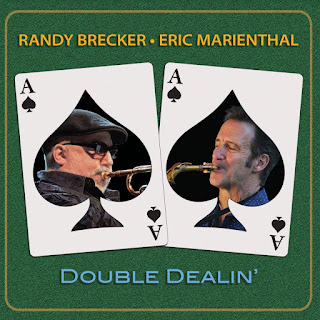 What do you get when you pair two visionaries who happen to be kindred spirits? You get an ace in the hole! Multi Grammy award-winners trumpeter/flugelhornist Randy Brecker and saxophonist Eric Marienthal, join forces for an unforgettable journey on their Shanachie Entertainment debut, Double Dealin'. It’s all aboveboard as Brecker and Marienthal opt not to follow suit, but rather let the spirit of the moment be their guide as they draw some wild cards and beautifully fuse the finer elements of traditional and contemporary jazz. Randy Brecker, who was a key player in numerous ground-breaking fusion bands like Blood, Sweat and Tears and Larry Coryell’s The Eleventh House states, “Duke Ellington said ‘There are only two kinds of music, bad and good' and we both love the latter!” Double Dealin’ marks Brecker and Marienthal’s first co-led recording and unites the dynamic duo with keyboardist and producer George Whitty, bassist John Patitucci and drummer Dave Weckl.

Brecker and Marienthal have built careers being musician’s musicians. Randy Brecker has remained at the forefront of creative music for over six decades, collaborating with everyone from Art Blakey’s Jazz Messengers, Horace Silver, Thad Jones/Mel Lewis Orchestra, The Brecker Brothers (with his late tenor titan brother, Michael Brecker), Bruce Springsteen, Parliament/Funkadelic and Steely Dan. Saxophonist Eric Marienthal’s equally impressive career has allowed him to captivate audiences alongside everyone from Chick Corea’s Elektric Band, Patti Austin, Lee Ritenour, Elton John, Billy Joel and Stevie Wonder, among others. Longtime comrades on and off the stage, Marienthal and Brecker credit one thing for bringing them together- “Pizza!” exclaims Brecker, who won a Grammy this year for his album with the NDR Big Band. Laughing he adds, “We dig each other's playing and personalities. We also like each other’s families. Eric and I have played together many times throughout the years with different ensembles including Jeff Lorber, The GRP Big Band and always 'clicked' as a section, so we were long overdue in doing a project together.” Marienthel adds, “Yes, definitely pizza! Besides being one of the world’s great musicians and trumpet players, Randy is a very open and cool guy. Getting to play with Randy is like getting to make a pizza with Mario Batali! You just know that no matter what you do it’s going to end up being great.”