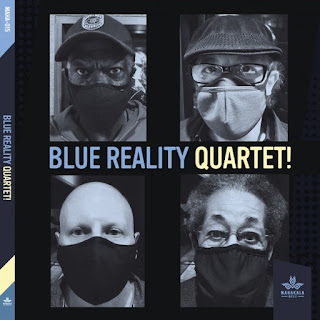 In 2018, jazz musician extraordinaire Michael Marcus got an invite to bring his duo with drummer Jay Rosen to the Austrian venue Jazzgalerie Nickelsdorf. And when he arrived, the promoter of their show sprung a novel idea on them: performing their set with fellow reedsman Joe McPhee and another drummer. “It was a great concept,” Marcus remembers. “And the chemistry was really good.”

So much so that Marcus wanted to capture the sound of this unusual group—two horns and two percussionists improvising without a bass player or a piano or any other chordal instruments—on record. But with the drummer they played with in Austria unavailable to travel, Marcus, Rosen, and McPhee called on their friend and collaborator Warren Smith. And the Blue Reality Quartet was born.

The name of this project has a little history behind it and multiple layers of meaning. 20 years ago, Marcus and Rosen recorded an album called Blue Reality as part of a trio with bassist Tarus Matteen. It was another one of those magical sessions with the right mix of players and energy that Marcus always wanted to revisit. But with Mateen busy working alongside pianist Jason Moran, that reunion has been put on the back burner.

At the same time, Marcus wanted to use the name of this group to acknowledge the time and circumstances in which the album was recorded. As the front cover should tell you - pictures of each player, their faces covered by a mask, the four men met up in a New York studio in the thick of the coronavirus pandemic. So Blue Reality is a nod to a terrible time in our collective history that had an incalculable impact on the music industry and resulted in the deaths of thousands of people worldwide.

While all of that was weighing on the four musicians last November when they entered New York’s East Side Studios, the feeling of listening to the Blue Reality Quartet is one of catharsis. Beginning with the meditative and gorgeous “Love Exists Everywhere,” the album moves through various moods and modes.

“Bluer Than Blue” is a joyous tangle with McPhee and Marcus, playing tenor sax and bass clarinet respectively, spiraling around one other while Smith interjects with pointed hits of the vibes and Rosen dances through it all with a freeform fervor. The rollicking “East Side Dilemma” allows the two horn players and two drummers to square off with dueling solos and interlocked rhythms. And the languid “Warren’s Theme” is a perfect showcase for Smith’s vibes playing, accompanied perfectly by Marcus on bass flute and Rosen’s well placed percussion jangles and splashes.

Throughout, the quartet switches up instrumentation, allowing them to set different tones for each track and to show off their acumen as players and artists. “It’s like being a painter,” Marcus says. “We just wanted some different colors.”

What is also clear in listening to the first Blue Reality Quartet album is that these four men were obviously inspired by one another to experiment and push their personal limits as players and improvisers. And to hear Marcus tell it, the chemistry that this group had was so potent that they’re all ready to get back together for another hit. “I think there’s a real mutual love within the group,” he says. “I think there’s a real potential there. It’s really special and really unique and I don’t think there’s anything quite like it out there.” We couldn’t agree more.