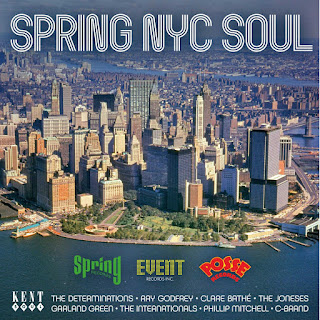 New York label Spring, and its Event and Posse subsidiaries, were very active from 1967 up to the late 80s. They specialised in the city’s black music and tried most variations, including soul, gospel, disco, show tunes, funk, harmony and later electro and rap. Here on the collection you will find the most soulful tracks that have so far not appeared on Kent CDs and have found six completed recordings that were previously unreleased. Two of these are ballads, one of which is Maxine Weldon’s stunning version of Ray Godfrey’s song ‘I’m The Other Half Of You’ and there is a new unknown, sweet soul song from one-time Tavares member Victor Tavares. Ray Godfrey features heavily with two unissued dance tracks – the Joe Simon-covered ‘I Love You More Than Anything’ and the previously unheard song ‘Hold On’. The Determinations’ opener ‘Save The Best For Me’ is another of his great songs, previously only on a rare LP. Other 70s dancers come from Ronnie Walker, Act I and the Joneses. More ballads are provided by Joe Simon, Leroy Randolph and, surprisingly, the Fatback Band. 60s uptempo soul comes from Prince Harold, Little Eva Harris and Richard Barbary. The offerings of the Internationals, US and Vernon Brown are harder to categorise; quirky and worthy but in their own individual styles. The great songwriter Phillip Mitchell went funky on his “Jody” song ‘If We Get Caught (I Don’t Know You)’ as did Phil Flowers with his heavy guitar-infused ‘Kill The Monster’. Philly girls the Equations sing the poppy and catchy ‘Boiling Like Water’, Jackie Verdell gives us gospel in a modern soul setting and C-Brand take us into the 80s with their two-stepper ‘Plenty Of Love’. This is a catholic selection for lovers of soul through its most interesting eras. 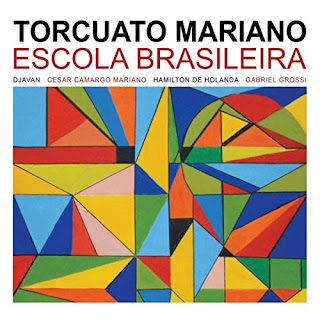 Veteran guitarist, producer and composer Torcuato Mariano was born in Argentina but has been living in Brazil, working with many of its top jazz musicians since the late 70s. He celebrates 25 years as a recording artist with ESCOLA BRASILEIRA – literally “Brazilian School” - a dynamically textured, rhythmically eclectic romp through a multitude of that culture’s sophisticated and exotic jazz-related styles. Backed by lush strings and horns, Mariano surrounds his snappy playing with guest performances by Brazilian greats, singer-songwriter Djavan, pianist Cesar Camargo Mariano, bandolinist Hamilton de Holanda and harmonica player Gabriel Grossi. Also featured is renowned American vocalist Toni Scruggs. ~ smoothjazz.com 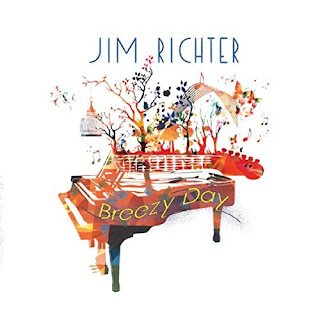 Getting back to making music full time after years where other priorities took precedence, guitarist, keyboardist and composer Jim Richter taps back into his rock/blues roots with a mix of deep soulfulness, playful buoyancy and fiery intensity on his new album BREEZY DAY. Hitting all the infectious yet artsy-cool sweet spots of Steely Dan and Larry Carlton, he offers dreamy ballads, funk jams, island delights and bluesy grit – in addition to playful titles that pay homage to Bill Evans and Weather Report. ~ smoothjazz.com
Veteran trumpeter John Bailey imagines a world inherited from a President Dizzy Gillespie administration on his celebratory second album. ~ smoothjazz.com