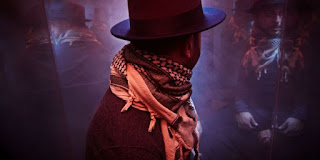 Chicago’s Bassel & The Supernaturals just released their new single “Calculated Love” and premiered it over at Glide Magazine, which stated “Calculated Love kicks off with a sharp bluesy guitar solo before bursting into a funky disco groove. Bassel Almadani lays his silky smooth and extra suave vocals over harmonic background singers and feisty guitar and brass grooves. The music brings to mind retro acts like Earth, Wind & Fire alongside more modern groovers like Jamiroquai, making for a song that preaches love and invites the listener to grab a partner and hit the dance floor.”

“Calculated Love” is the first song to be revealed from Bassel’s highly anticipated new album Smoke & Mirrors, set for release in May, 2019. The album continues the band’s message of  a “Syrian heart, Chicago soul,” but also dismantles the myth of glamour, glitz and fame that people commonly perceive of entertainers.
“Calculated Love” is the perfect tune for this upcoming Valentine’s Day with its upbeat catchy groove that celebrates love for what it is. Bassel explains, “Calculated Love is about everyday real love - watching movies with sweat pants on, eating pizza, exchanging memes... it sets a different tone for meaningful love by contradicting the Hollywood romance we all seem to be chasing after.”

Bassel & The Supernaturals combines funk and soul with captivating lyrics about love, loss, and a war in Syria that has affected Bassel Almadani’s family along with 10,000,000 others. The soulful Syrian-American vocalist and his ensemble broke out with their 2017 release Elements, which earned them critical praise from Noisey, Huffington Post, Associated Press, Reuters, Al Jazeera, Now This, PRI The World, Paste, and more. Bassel also donated over 20% of their merchandise proceeds to humanitarian relief through the Karam Foundation during their campaign. It also landed the band at SXSW’s 2017 “ContraBand: #MusicUnites” showcase featuring musicians from countries affected by the U.S. travel ban. A fantastic showcase that sent the message that music transcends borders to unite rather than divide.