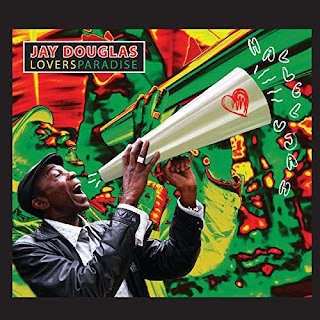 Toronto's own Juno nominated reggae master and soulful singer Jay Douglas has officially released his new album "Lovers Paradise" via Slammin Media. The album is a best of collection of Jay Douglas' classic tracks, as well as some unreleased material that fans have been clamoring for. The album has been performing well at Campus Radio in the United States and continues to gain traction with reggae lovers across North America.

In over 45 years of entertainment, Jay has developed a wide-ranging repertoire of American Blues, West Indian Rhythms, Jazz Standards combined with fancy footwork and incredible on-stage charisma. In the early '60s, Jay fronted the R&B group "The Cougars" who with their skill and verve lit up the city of Montreal as well as Toronto's Yonge Street nightclubs in the late '70s with Soul Funk and Reggae. Over the past 10 years, Jay has performed around the world, and at annual Toronto events such as the Beaches Jazz Festival, Jerk Fest, Canadian National Exhibition, Yonge and Dundas Square, and a Taste of Lawrence. Jay was proclaimed the winner of NOW Magazine's Toronto's "Best R&B Act" in 2006, and "Male Reggae Vocalist of the Year" at the Annual Toronto Reggae Awards in 2007. During this time Seattle, Washington-based promotions company, "Light in the Attic", made Jay their bandleader for the "From Jamaica to Toronto" concert launch at the Harbourfront Centre in Toronto in July 2006. This successful show was successfully lead by Jay in both Vancouver and Montreal. Recently, Jay was nominated for "Reggae Recording of the Year" at the 2012 JUNO Awards and was the recipient of the "G98.7 FM Entertainment Award" at the Harry Jarome awards that same year. Jay worked with Councillor Josh Colle to establish Reggae Lane a roadway in Toronto Canada. The neighbourhood near Reggae Lane was recognized as a centre for the Reggae recording as early as the late 1960s. His recording of Reggae Lane is to honour that tradition.

Essential tracks here include Messengers, his recent collaboration with Chris Butcher (don't miss the Dubmatix throwback remix!), Leonard Cohen cover Hallelujah, Celebrate My Love, and the R&B flavored Turn Me On. Douglas has been busy in the studio lately, and just returned from a homecoming trip to Jamaica where he garnered rave reviews. Lovers Paradise (Best of) is available from Slammin Media and distributed World Wide by Believe Distribution.