BOSSACUCANOVA - OUR KIND OF BOSSA 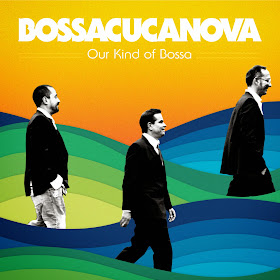 Brazil has long conjured blissful imagery. Ever since Gilberto and Getz released ‘The Girl From Ipanema’ in 1964, bossa nova’s elegant smoothness has been thought to be indicative of the world’s fifth largest nation. While financial disaster nearly destroyed the land just a few years ago, recent reforms have made it one of the planet’s fastest growing economies. “As goes the culture, so the music,” says BossaCucaNova’s DJ Marcelinho DaLua.

“We are living through a new economic freedom,” he says, “which is causing people to feel confident and enjoy new opportunities. Today the music scene is not limited to São Paulo, Rio de Janeiro and Recife. Other spots and rhythms are being exposed via the media and unwrapped to the public, which is certainly going to get even better during the World Cup.”

Maria Rita, one of the country’s most recognizable vocalists, joins the David Feldman Trio on a cover of Chico Baurque’s ‘Deixa a Menina.’ The piano-driven groove provides the perfect bedrock for Rita’s seductive and playful vocals. The keys return front and center on the Ray Charles-inspired ‘Balança,’ featuring vocalist Cris Delanno. This original track is one of their most danceable in recent memory.

“While dreaming up a variety of possibilities, instruments, musicians and singers, we tried to sense what would be the most suitable for every song,” says Márcio Menescal. “We let our minds fly freely—even if they go too far away—and are very happy with who we’ve collaborated with. There are also cases where we invite people we meet on the road or in the studio that we know would shine on this or that song.”

Singer Emílio Santiago, who cut his teeth on Polydor Records in 1973 and was a force in Brazilian music until his passing in March 2013, certainly shines above the shimmering string section on ‘E Preciso Perdoar.’ The João Gilberto classic is given a psychedelic treatment by conductor Flávio Mendes—Dado Brother fittingly cites famed Motown producer Norman Whitfield, who was responsible for smash hits by Marvin Gaye, the Temptations and Gladys Knight, as an influence.

“We conduct research on a daily basis,” says Alex Moreira, discussing the cover songs they’ve chosen on this album. “DJ DaLua spends hours visiting second hand music shops around the world in search of old vinyl LPs. Every one of us makes suggestions, presenting rare MPB tracks and adding them to our playlist. During the recording sessions we opt for the coolest ones. We also talk to our master, Roberto Menescal, who offers tips and advice.”

The album closes on a funky note: Maurício Tapajós and Paulo César Pinheiroturn up the heat on “Tô voltando,” a celebration of Brazilian identity and culture. Roberto Menescal adds strings while Zé Carlos adds the best guitar line on the album, reminiscent of old Jorge Ben soccer anthems the nation so loves. Beginning with a tribute and returning home to end succinctly describes Brazil’s cultural plight over the last decade, with an energy and vibe BossaCucaNova captures and delivers exquisitely.

“After 15 years on the road, we are more than a big band—we are a large family!” says an excited Menescal. The current line-up has been together over a decade now: DJ DaLua, Moreira on keyboards, and Menescal on bass, along with percussionistDado Brother and vocalist Cris Delanno. The band also rotates in Flávio Mendes on guitars and vocals and Rodrigo Sha on vocals, sax and flute.

“Somehow we keep doing it our own way, with our own beat, in a unique studio process and production that makes this band so special and timeless,” he concludes. “We play and produce wholeheartedly, and the albums are consistent. Above all we end up learning a lot and getting better in the studio, as well as growing personally, which gives us a more solid result at work.”